The Inspirations For Tai Chi

By Matt Hill19th August 2022No Comments 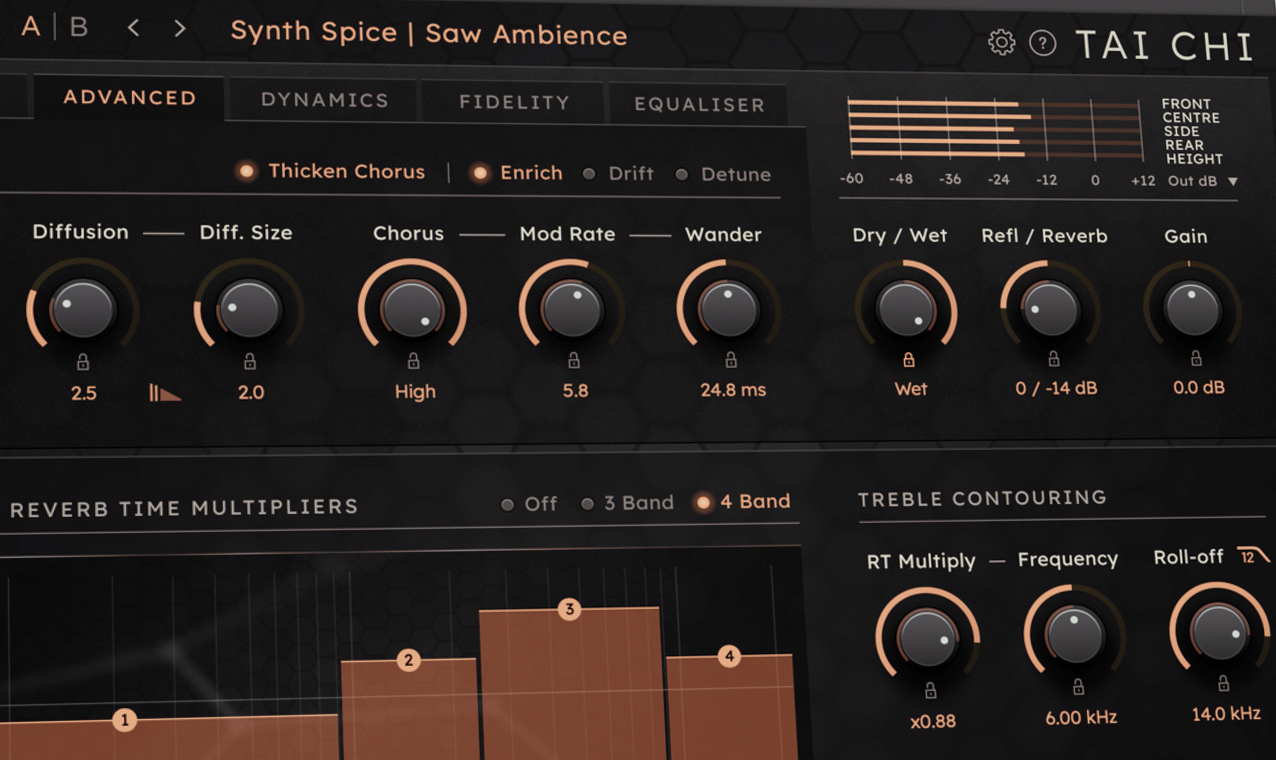 Tai Chi by Reverb Foundry recently joined the LiquidSonics portfolio. If you missed it when it was launched last year, now is a great time for an introduction.

An ensemble reverb is one with a strong focus on chorusing, and Tai Chi really nails it with a heavily modulated contemporary algorithmic design like no other. If you’re a fan of reverbs that swell pads into a luscious and rich soundscape, this is the one.

It’s also ideal for thickening vocals and electric piano in a way that a chorus simply couldn’t do on its own.

If you tend to use just a little reverb or only lean into the more realistic and transparent verbs in the LiquidSonics portfolio, just imagine what the Dimension D chorus might have been if it were a reverb and you’re some of the way to understanding what a great ensemble reverb can do for your music.

This article is for you if you would like to learn more about Tai Chi, and the encounters with classic reverbs from Lexicon and TC Electronic that inspired its creation. Much of the blog entry here is taken from a post I made to the GearSpace forum shortly before Tai Chi‘s release about the concepts and inspirations that led to this reverb, and has been updated with some additional details post-release. 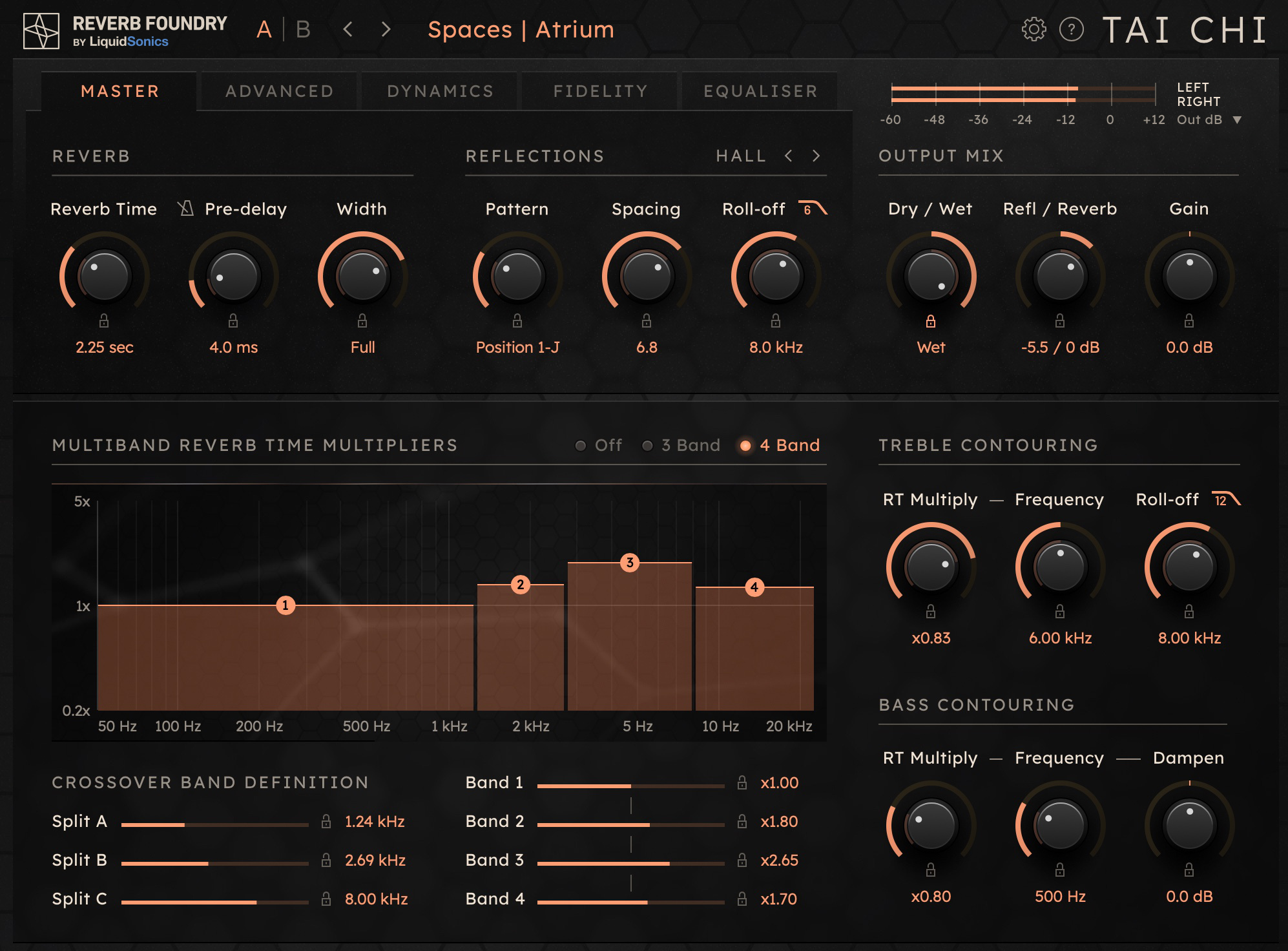 When I picked up my Lexicon 480 the seller also had a Lexicon 224X. Both had been recently serviced, were physically in pretty good condition for the age, and had a good studio history being used on some albums that I really love. I couldn’t resist it, and ended up spending twice as much as planned that day! It was a while before I really spent much time with it as I was initially very focused on the 480, but I ultimately came to love it for its chorus abilities on synths, guitar, and vocals as it was doing things to music nothing else in the rack could do. The evolving twisting textures that come out of that thing on certain material is just magic, anybody that’s used one or has spent time playing with the chorus modes in Softube/NI’s RC24 probably knows what I mean.
Incidentally this also provided the motivation to upgrade HD Cart‘s modulation capabilities while I had the bonnet up to add in Atmos support, and this now supports chorusing too. You can read more about that in this blog post.
For a while I considered a Concert Hall emulation, but although modulation of nested all pass filters creates amazing an chorus there’s too much about nested all-pass filters in reverb loops that I don’t personally like the sound of and that’s before we even have a discussion about what do with the early reflections (which are absent on a 224). So the challenge here was get that amazing ensemble character verb sound, try to avoid all the pitchy artefacts or recursive all-pass colour you can end up with while chasing it, do something interesting with reflections, do something that sounds contemporary yet unique, and if possible arrive at something that can scale gracefully to the higher surround channel counts.
All of this is complimented by my admiration of TC Electronic’s VSS3 and VSS4 (but there is not much point reproducing those, Martin from Relab is on it and TC released great first-party versions too). I thought for a while about what it is I enjoy in those, and besides the chorusing one of the big factors is the way it handles the reverb decay time editing as it differs from what I’m used to in a Lexicon or Bricasti design. They define decays with reverb time multipliers in different frequency bands (i.e. multi-band processing) rather than gently contouring over time in the Lexicon style at a low and high frequency point. It’s an interesting topic, and more is coming on this in a future post.
I like both styles though so built them into Tai Chi, having both means getting hold of some really powerful options to sculpt reverb decays.
The base Tai Chi reverbs were sounding rich luscious, and very contemporary. So thinking again about the classic sound of low bit depth and limited sample rate designs led me to add control over fidelity/degradation for an extra dimension. Dynamics is also a must in modern reverbs. Linking all of that up together for the first time in this product made a lot of sense. So Tai Chi is a product that has been inspired by techniques in a lot of my old favourites without being an emulation or reproduction of any of them. It is a tool taken in a very modern direction to help me blend multiple reverb styles and concepts in a way that works well in a modern workflow.

Originally it wasn’t going to be surround-capable as the technology is quite demanding, but the moment I loaded this up on a vocal stack spread over a surround bed and dialled in the chorus I got one of those ‘wow that sounds amazing’ moments and just couldn’t let that go of it!

Since its original release I have added more classic reverb features.

Spread is a concept from the Lexicon days where the reverb is delayed before it is injected into some of the delay lines of the main the loop. This means you don’t get the full force of the reverb right away. It creates a very interesting blooming effect that effectively applies an attack envelope to the revert onset, allowing it to build in density over time just as a real hall would.

I have also added some high efficiency presets, so that those working with it in Atmos can easily fire it up in its most CPU friendly posture.

I had a lot of questions during the beta about why it was named Tai Chi.

If you’ve ever watched somebody skilled in the art there is a beautiful slowly evolving motion full of power and control it is absolutely captivating, and to me ensemble reverb is all about a powerful evolution of sound in an elegant and sophisticated way as it develops through motion (chorusing).

When delving into ensemble reverb design, essential to achieving a beautiful thickening of the sound without pitchiness is to ensure all of the modulators remain in balance as they are in motion. This gives the reverb a strong and beautiful posture.

Since I was also inspired by the amazing power and control of the VSS algorithms which allow reverbs to define textures in space over time in incredible ways, it was fantastic that it reflects the initialism of the manufacturer there too. So a natural pick.

If you’d like to hear how powerful it is we have audio demos on the Tai Chi product page, and some great videos are in the works that are coming out very soon. Until then, why not take a listen on your own material using the 14-day demo – my tip is to check it out on any synth, pad, vocal or electric piano lines you might be working on – it sounds incredibly rich and luscious, and the reverb decay time multipliers are great fun to play with!

The reverb algorithm powering Tai Chi is one of the most powerful and flexible I have ever published. I felt it was important to make this accessible to as many people as possible as good ensemble reverbs are not all that easy to come by.

For this reason there is a lite and a standard edition, the lite at $99 and the standard $199.

The lite contains the core algorithm with all of the modulation capabilities that make Tai Chi such a special reverb. I think it’s the ideal power-house reverb for you if you are into synths or are just beginning to look for a new modern design for your stereo productions to give them an extra edge. It’s probably the most heavyweight reverb to bear the lite name so don’t overlook what it can do if you’d like to save some cash.

The standard edition takes things further with full Atmos support enabling composers working in surround to create wonderful rich otherworldly soundscapes, textures and captivating surround experiences. Already some top sound designers in LA are loving getting to grips with it! It is also home to the decay time multipliers that mean you can warp and twist your verbs with reckless abandon.

Other features like the spread control and dynamics bring advanced features to the table meaning you can melt the reverb into the source beautifully; spread in particular greatly enhances its ability to produce large-sounding spaces.

Both edition are available in the LiquidSonics store now, I hope you enjoy Tai Chi.