By Matt Hill11th August 2022No Comments 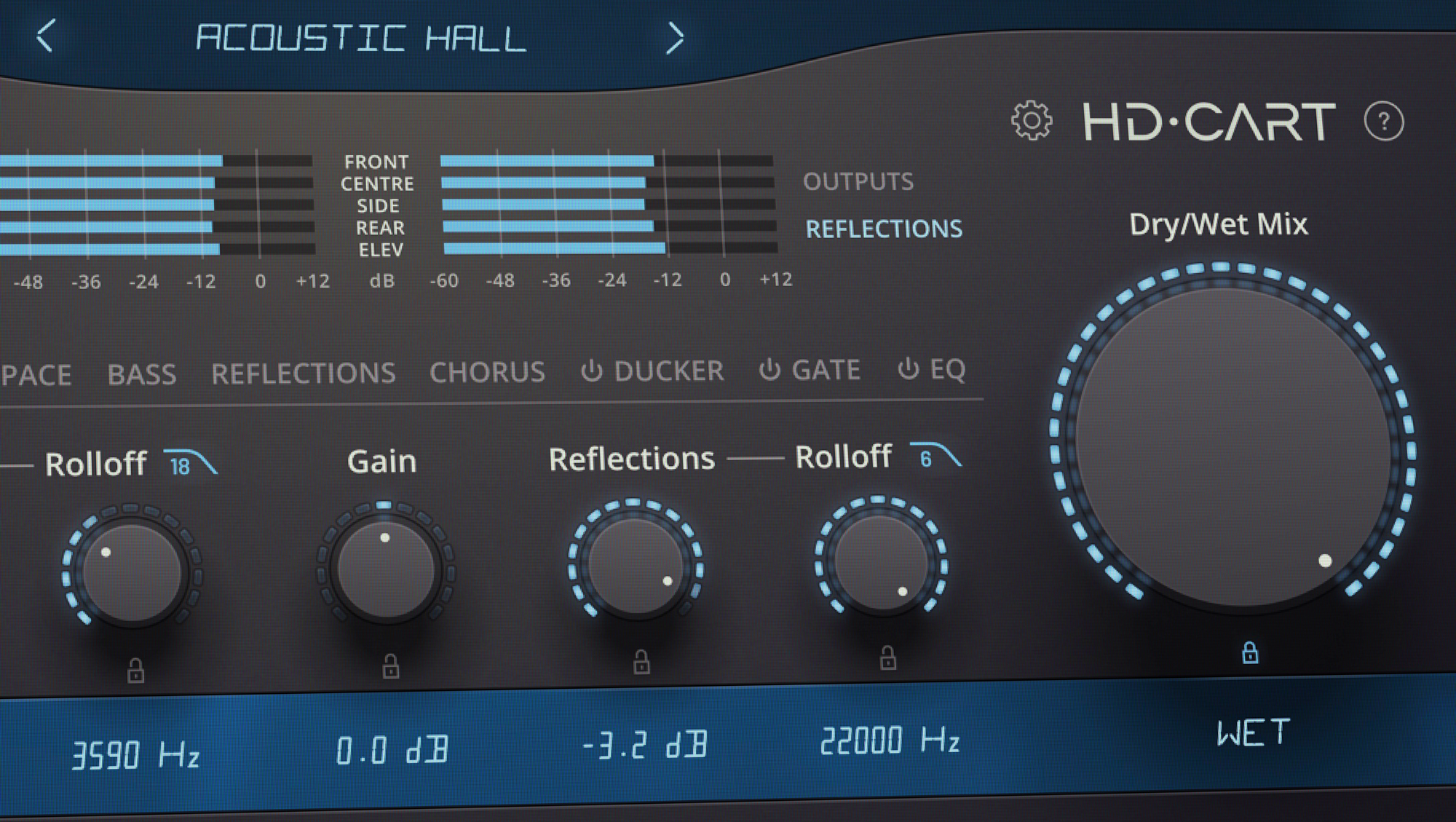 If you are working on Atmos remixes of famous works from the seventies through to the late nineties, there is often a need for a surround-capable reverb with period authenticity. For plate reverbs there is Lustrous Plates Surround, but when a digital reverb is needed you are typically going to be limited to using stereo reverbs as until now digital reverb recreations have focused solely on stereo models which means it is much harder to flood a space with beautiful reverb naturally.

HD Cart was the first reverb released under the Reverb Foundry brand. It is a recreation of a very rare expansion cartridge for the best-selling digital reverb of the 1980s. The expansion provided a higher density reverb algorithm than was available elsewhere at the time, and was primarily designed to be used in quadraphonic surround.

HD Cart was recently updated to v1.2 with a period-authentic approach to 7.1.6 processing – a first for native Atmos-capable surround reverbs and one that you should definitely check out if you are working in surround.

While 7.1.6 support is the headline feature, the v1.2 represents a major step forwards for HD Cart with the inclusion of chorusing, pre-delay tempo sync, new filter slopes, a dynamics module (ducker and compression), a gate, scalable UI, parameter locking and a post EQ.

For a brief overview of the new features in v1.2 you can check out Julian David’s video of the changes below.

The algorithm was the only example of a surround reverb ever presented for the original hardware device, and to date no other attempt to reproduce it in native form has been made. Further, the HD Cart plug-in is unique in its ability to provide Atmos-capable surround reverberation with a distinctly 80s reverb acoustic aesthetic with a unique heritage.

The algorithm has some very unusual properties due to its intended use as a tool for the live augmentation of natural reverberation of classical performances in concert halls. Any front of house engineer knows the challenge of feedback in a system with live mics playing out into a venue. Doing so with the expressive intention of augmenting the ambience of the space creates distinct challenges as feedback from the early reflections in particular would quickly turn into a feedback loop due to the level of gain needed.

A way to solve that problem is to ensure any delay through the system changes its length quickly enough that resonances cannot accumulate. Of course, gliding the reflections would produce a dramatic chorus effect not suitable for a live concert performance, so here groups of three reflection taps fade in and out, jumping to a new position as they fade through a zero-crossing. The jump means the delay time changes quickly without the typical listener noticing a delay time adjustment, so resonances do not build up and concert goers simply enjoy an improved auditory experience.

This quite dramatic motion in the early portion of the reverberation creates the liveliest set of early reflections probably ever heard, but the effect is still very musical. The reverb tail is of course also modulated. Although it is a bespoke algorithm, the modulation here is somewhat similar to the classic Random Hall so you may find aspects of the late field somewhat familiar.

This of course makes the reverb one to consider for live use. We’re increasingly seeing Seventh Heaven used for live gigs since many engineers are so familiar with using Bricasti M7s on the road, but HD Cart is one to consider as well.

The original hardware unit features two processing boards, usually these were used for dual-reverb configurations (one reverb running per board). The HD Cart algorithm utilises both boards for the same algorithm, so is the only time the hardware could be fully utilised in a single patch. Naturally the longer the reverb delay loops and the more taps used, the greater latitude afforded to the algorithm designer – so the lucky few that ever owned the expansion consider this the ultimate realisation of potential in the hardware legend.

Naturally the algorithm could also be used in stereo, in which case the quad outputs were simply folded down to stereo. Alternatively for 5.0, there was a recommendation to use a fold-down of the rears as a centre channel due to the hardware being limited to 4 outputs.

While a functional approach, this somewhat collapses the sense of space in the rears, so a new mode was introduced (and made default) for the v1.2 HD Cart update that pulls additional taps from the reverb loop and reflections engine for a dedicated centre channel. This significantly improves spatialisation.

When extending the device further to 7.1.6, care was taken to follow the original design principles of the device when adding additional reverb and reflection taps. Care was also made to ensure the original parameters such as front/rear mix, rear reflection time/filtering, and so on made sense for the side and elevation channels in 7.x and above. For example, if you choose a rear reflection delay time of 50ms with 6dB attenuation, the sides will slip in at 25ms with 3dB attenuation – this means it is quick and easy to create cohesive and natural sounding spaces.

The original algorithm was not designed with modern fold-down requirements in mind, so when designing spaces for surround it is worth ensuring the rear reflection delay times are at least 30 ms (ideally closer to 60) because they are not decorrelated. This helps to avoid any phase artefacts during fold-down. Also many of the default presets have the rear reflections set to mono, so make sure these are set to stereo (you may like to engage a parameter lock to ensure this as you work through the presets, a comprehensive parameter locking facility was also added in v1.2).

HD Cart sounds wonderfully rich as a high channel count surround reverb, and is unlike any other you will have in your plug-in rack so will be a fantastic addition to any surround template especially as memory and processing demands are reasonably light on the system.

The surround extension work in the v1.2 update is just the beginning, much more is included. The addition of chorusing is a natural extension by simply gliding various taps within the reverb and reflection engines.

The addition of a more traditional glide modulation (which can be used at the same time) greatly enhances the scope of the algorithm by unlocking richly textured chorusing for ensemble reverbs that shines on synth, pads and vocals.

Reverb ducking was added across the LiquidSonics portfolio throughout 2022. Other than some of the standard / lite editions, the final reverb in the range lacking the facility was HD Cart. Many of the reverbs also feature compression modes.

Ducking and compression has now been added so that you can take advantage of the clarity benefits of using a ducker on the reverb while leaving the reflections unaffected or the enhanced body of compressed reverbs.

Reverb gating is a staple of 80s production style, but has many applications in the modern era and HD Cart now includes this facility.

It is often useful to have a post EQ available within a reverb so you don’t need to supplement the mixer channel with one from a third party and can include filtering in user presets.

HD Cart now includes a simple three-band EQ. The variable-slope low and high roll-offs are joined by a mid-band that can be set as a low shelf, high shelf or peak type.

The v1.2 update includes a number of smaller enhancements including full support for tempo sync on pre-delay, parameter locking, user interface resizing controls from 70% through to 200% in discrete steps, new early/late roll-off curves (the previous of 6 dB / octave filters are joined by 12, 18 and 24 dB / octave), and a selection of additional presets many of which take advantage of the new facilities.

If you are updating from an older version of HD Cart, or wish to try it out, simply download the installers below. If you need a demo code just visit our demos page.

Whether you’re looking for a unique reverb for stereo or surround productions, HD Cart has a lot to offer if you have an interest in the finest 80s style reverbs but don’t want to lean into the same reverb plug-ins every time. Check out the free demo and hear the best side of what is perhaps the most legendary hardware reverb ever made!