By Matt Hill15th November 2021No Comments 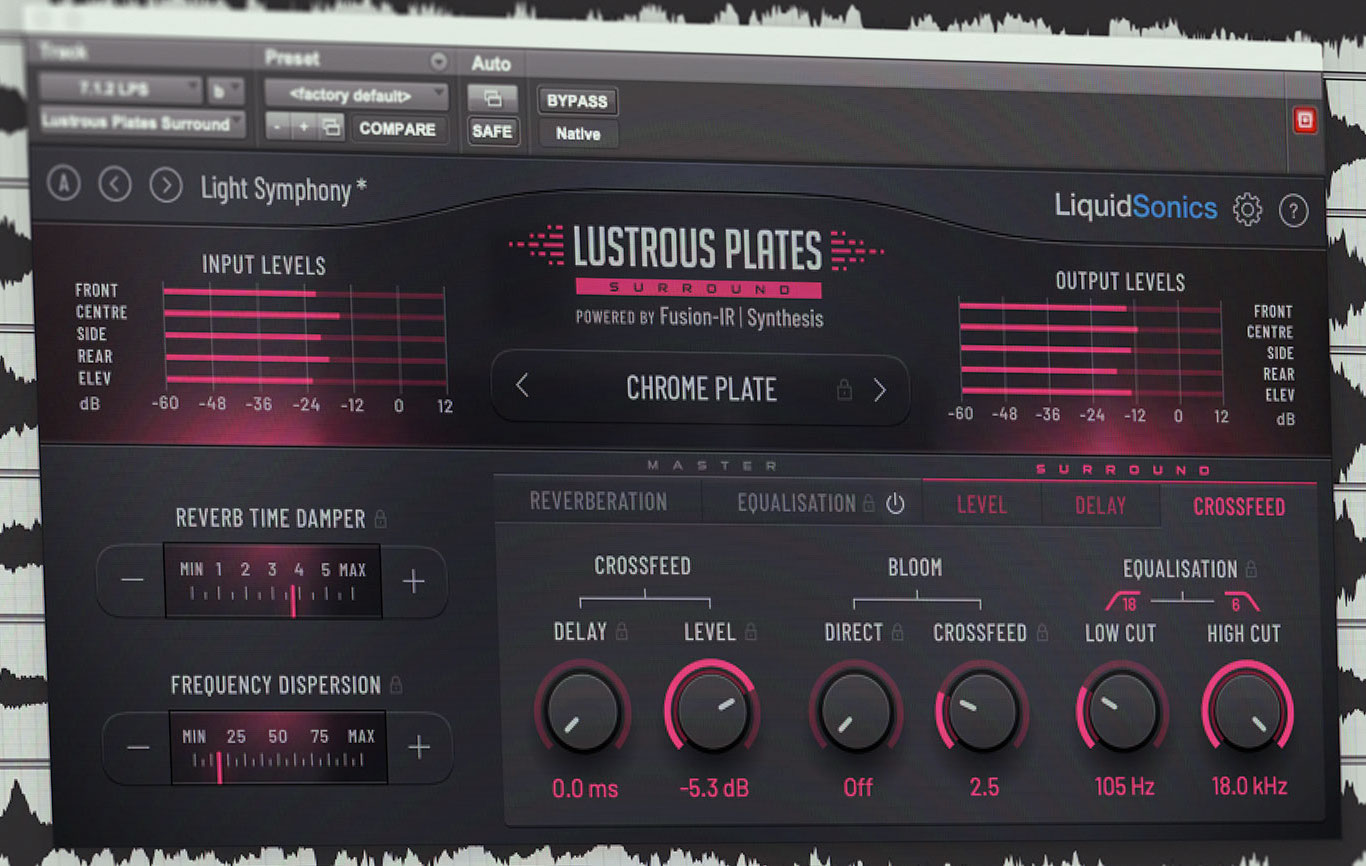 Plate reverbs are an essential tool for music production, but until now those working in immersive formats didn’t have a dedicated multi-channel plug-in available that can accurately capture the distinctive spectral decay and dispersion properties that you hear in a good plate reverb.

When mixing or remixing music for home and headphones-focused Atmos delivery formats it essential to use a reverb with excellent fold-down capabilities, so using multiple stereo plate reverbs is a challenge. Lustrous Plates Surround is the ideal tool in these scenarios whether you are bringing classic tracks featuring plate reverbs into Atmos or working on original surround pieces calling for the distinctive sound of plate reverberation, and it’s a great companion to Cinematic Rooms for complex Atmos conversion workflows.

We’ve been testing Lustrous Plates for over a year now with some of the top producers and engineers working in surround. Emre Ramazanoglu has been putting Lustrous Plates to great use whilst working on Atmos conversion mixes. These are often delivered with effects, but using standard surround up-mix tools on surround stems typically doesn’t provide a natural sense of spatialisation. Emre had this to say about it:

It’s found its way as an essential part of my immersive audio mixing workflow for a number of reasons. If you’re not familiar with Atmos conversion mixes for example, we tend to work from mix stems with all effects printed (or occasionally as separate stems). My primary use is to replicate the sound of any printed stereo plates and make them immersive, by lowering or even cutting Lustrous Plates in the stereo (front) channels and leaving it to spread naturally in the surround and elevations.

The way Lustrous Plates Surround folds down is so conducive to getting my binaural mix exactly where I need it, it makes it really invaluable. I can have amazing character, thats totally immersive but no issues in the binaural mix. It’s really unusual and so so useful. I tend to go for reverbs in my immersive mixing that are less characterful to make sure I maintain the integrity of the original mix, but Lustrous Plates has been so well thought out and executed, it really stands alone in this way as a complementary tool, rather than a transformative one.

Another use I often find for Lustrous Plates is as a ‘throw down’ verb for more ambient pads or sounds I am spinning in the elevations. I adjust levels to keep it tethered to the lower space in the mix and it adds an amazing glue that I find hard to replicate with other plugins in this way. I can’t recommend it highly enough for all immersive audio mixing.”

The surround edition of Lustrous Plates is based on the stereo plate, but the algorithm needed substantial modifications to retain the same great sound but scale well from stereo up to 7.1.6. It wasn’t just a case of extending the DSP behind the scenes, more control was needed because just blanketing the surround field with immediate onset reverb doesn’t produce the best results. In surround, how a reverb bleeds across channels in time and at what level is very important, so cross-feed controls are needed.

We have control over cross-feed delay, bloom and level which really helps define the space. Filters were added too, because gently band-limiting the crossfeed really helped to thin out the low end of a plate (quite important to avoid overwhelming the low end space in a mix) and apply a bit of selective control over the high end fizz.

Plate reverbs can sometimes be a little poorly calibrated. You can find little level discrepancies between the left/right channels so I added a pan control and a pan-delay so that precedence effect could be played with. Combined with the dispersion biasing, it was enabling me to create complex spaces despite the simplicity of the control set.

Lustrous Plates Surround will retail for $249 but is available to buy now for the introductory price of $179. If you own a perpetual license for Lustrous Plates from LiquidSonics already you can upgrade for $50.

Users of Lustrous Plates in Slate Digital‘s All Access Pass are not eligible for the upgrade pricing.

All pricing will be held at this level throughout the Black Friday sale, and your LiquidSonics or Reverb Foundry loyalty coupons are eligible on purchases of full or upgrade licenses.