By Matt Hill16th November 2021No Comments 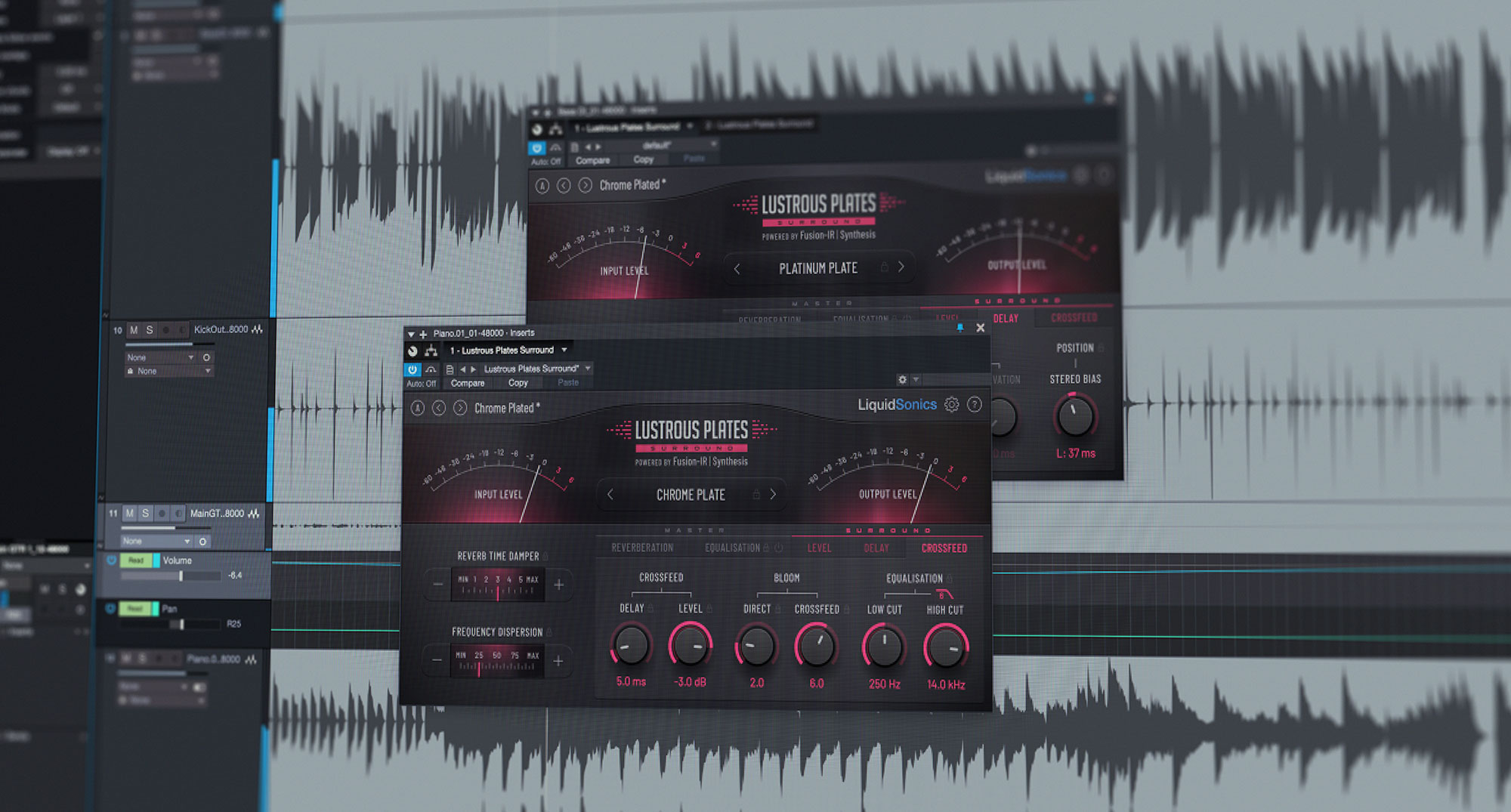 Historically enhancements made to stereo reverb to improve workflows in surround can offer benefits when working on stereo productions. Often it doesn’t make sense to back-port these to the stereo editions as it can unnecessarily complicate a plug-in’s interface with features many people would not need. Still, I have certainly reached for a surround edition when working in stereo if I am looking for a particular feature only available in the surround edition. Lustrous Plates Surround is no different, so anybody picking up the surround edition may find there are a few perks to enjoy in their stereo productions as well. Here’s a quick run-down of the little bonuses you should be on the lookout for…

Lustrous Plates Surround has some fantastic new controls that really widen the palette of sound.

Crucial in surround applications for pan tracking and propagation definition, but very useful tools in stereo, you can now control how much audio makes it through from left to right and right to left using the crossfeed level parameter. This was locked to -6dB in the stereo edition, but now you can select anything from -20 to 0dB.

Alternatively, use the low pass filter combined with crossfeed delay to enhance the natural spatialisation you get when sound propagates through air and is subject to high-frequency losses.

By using crossfeed delay, you can create a greater sense of space. As you have no discrete reflections in a plate, the crossfeed delay is a good place to look if you want to add a little extra width and depth.

Not strictly a phenomenon heard in a plate reverb, but you can now control how quickly the reverb develops from the initial onset to its maximum level. Plate reverbs are known for their instantaneous onset. Still, it can be helpful to slow that down, allowing the reverb to more gradually reach a crescendo. The ear will tend to associate a longer bloom with a larger volume of space.

Used in combination with crossfeed delay, the bloom controls (on direct and crossfeed) are a great way to position the reverb just a little further from the source. This avoids the distinct onset discontinuity (i.e. a slap delay) one can feel when using pre-delay alone with plates due to their lack of early reflections whilst benefiting from the increasing intelligibility on vocal sources that pre-delay provides. Onset controls more gradually ease the space between dry and wet components.

Real plates can sometimes have a little delay or level biasing between the left/right channels. This has been taken to extremes in Lustrous Plates Surround, so you can create exaggerated panning and left/right delay effects for creative purposes.

In combination with the ability to bias the dispersion (already present in the regular stereo edition), you can even use the Haas/precedence effect to perceptually shift the sound in space without actually changing the stereo balance using slight delays with different times between the channels. The Haas effect means that a little delay on the left side would make the sound appear as though coming from the right, hence achieving a pan without affecting level.

The Surround Engine Works In Stereo Too

To extend the reverb engine to surround required making some changes to the underlying convolution and modulation engines. This was undertaken for efficiency reasons, the need to extend crossfeed control and to optimise stereo imaging in surround workflows.

It is possible to use this engine in stereo as well, and in fact, it is the default mode of operation. The surround engine uses around a quarter to a third less CPU on the same preset than the original stereo algorithm (depending on your system and preset) and uses a little less memory as well. Any parameter changes that require the reverb to be re-synthesised (dispersion, damping, etc.) are also processed slightly more quickly.

When using Lustrous Plates Surround in stereo, you have the option to select the processing engine (original true-stereo or surround) from the settings menu. You also have the opportunity to switch to a bar style of metering in stereo if you prefer that over the more traditional VU-style level metering.

Suppose all of that whets your appetite, and you own a perpetual license for Lustrous Plates. In that case, you can upgrade for the difference in price between the standard and surround editions’ MSRP (this amounts to a $50 upgrade).

A Lustrous Plates Surround upgrade license requires surrendering the existing perpetual stereo license in your account, but surround licenses can unlock both editions so you won’t lose access to any of your DAW sessions that use the stereo edition as long as you have both editions installed.

Unfortunately, anybody with access to Lustrous Plates through the Slate Digital subscription service is not eligible for the upgrade rate. Our agreement with Slate Digital does not include Lustrous Plates cross-promotional pricing for their customers. However, if you don’t own any other LiquidSonics reverbs yet, once you pick up a copy of Lustrous Plates Surround, you will become eligible for our cross-promotional loyalty pricing scheme. You can start to make big savings on some of the other great reverbs in the store, like Cinematic Rooms or Seventh Heaven.