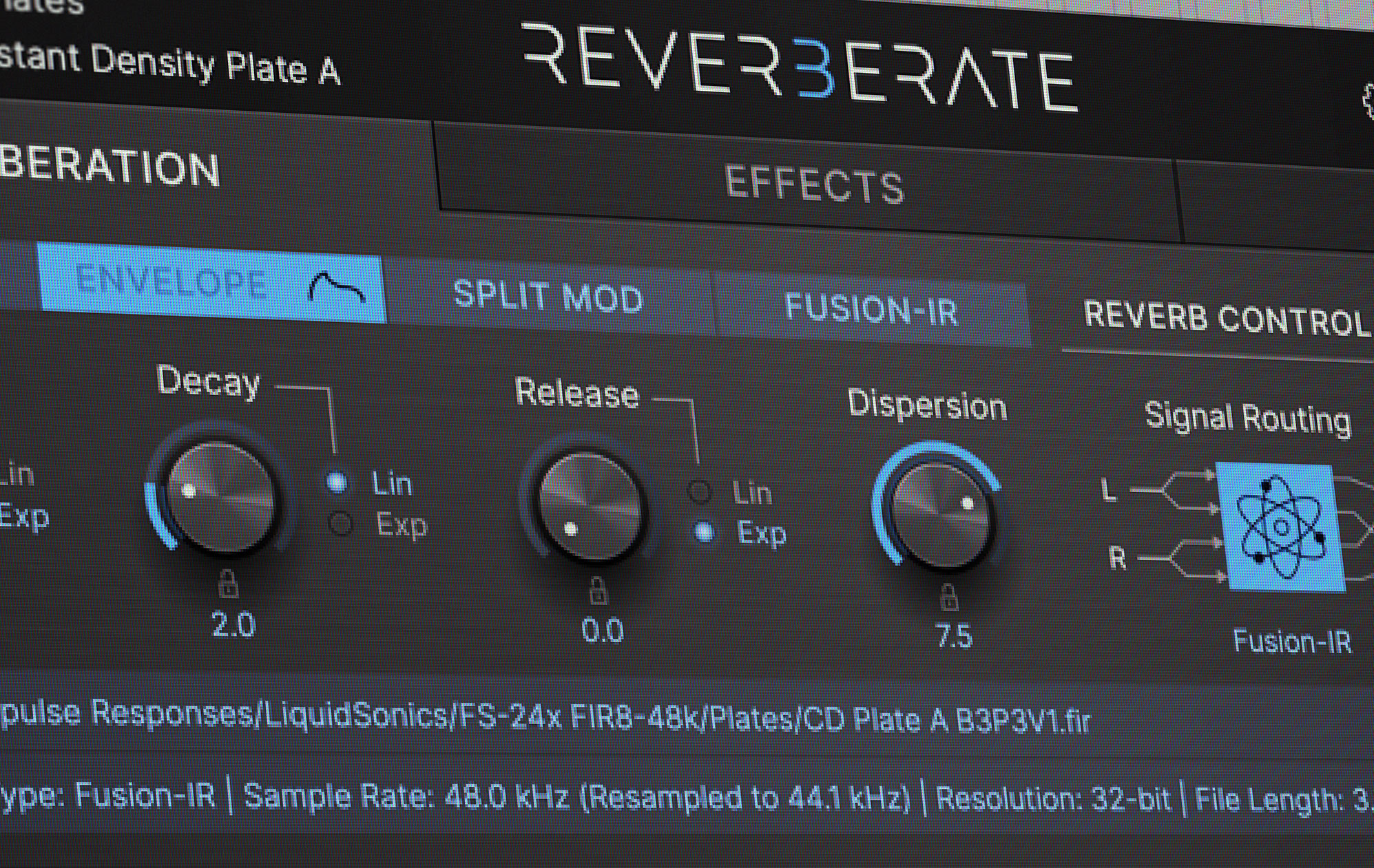 There has always been something special about plate reverbs, they sound like nothing else! The combination of a very high density decay with uniquely a metallic tone that starts with a sudden whip-crack makes them incredibly distinctive. You can read more about what makes plate reverbs sound unique in a deeper dive about dispersion in our Lustrous Plates blog post.

From the very onset of digital reverb simulation, plates have been a firm favourite on the menu of algorithms presented to engineers. Although the digital plates in classic reverbs like the Lexicon 224/480 or EMT 250 quickly mastered the tone and super-high density decay of a physical plate (and the likes of M7 take that to new highs) very few hardware devices have included any simulation of the effects of dispersion. While two out of three ain’t bad, it wasn’t until software-based reverbs became available that we started to see dispersion being taken more seriously. Reverbs like Valhalla Plate were amongst the first to get this right, and more recently plug-ins like Lustrous Plates allow you to modify the amount of the simulated effect.

Convolution reverbs using captures of real plates of course reproduce the effect as well. Although in at least one notable exception the dispersion has actually been trimmed out of the captures, presumably by an engineer not realising the whip-like sound was a key part of the character of the unit rather than a deconvolution artefact arising from device nonlinearities which can sometimes sound somewhat similar. Naming no names, of course.

Many classic hardware plate algorithms like Lexicon’s Rich Plate or Constant Density Plate (itself inspired by the EMT 250’s plate algorithm) are well known and still in use today by many professional engineers. They sound fantastic, but I always felt they would shine a little brighter with the addition of dispersion. In the past I had experimented with applying dispersion modelling to static and Fusion-IR captures with great success, so it was a natural step to bring such a capability to Reverberate 3 so everybody could try it themselves.

Finally it’s graduating from the workbench to the studio in Reverberate 3.1 – try it out today with some of the new captures in FS-24x or FS-48, I hope you agree with me that these classic plate algorithms have never sounded so good! 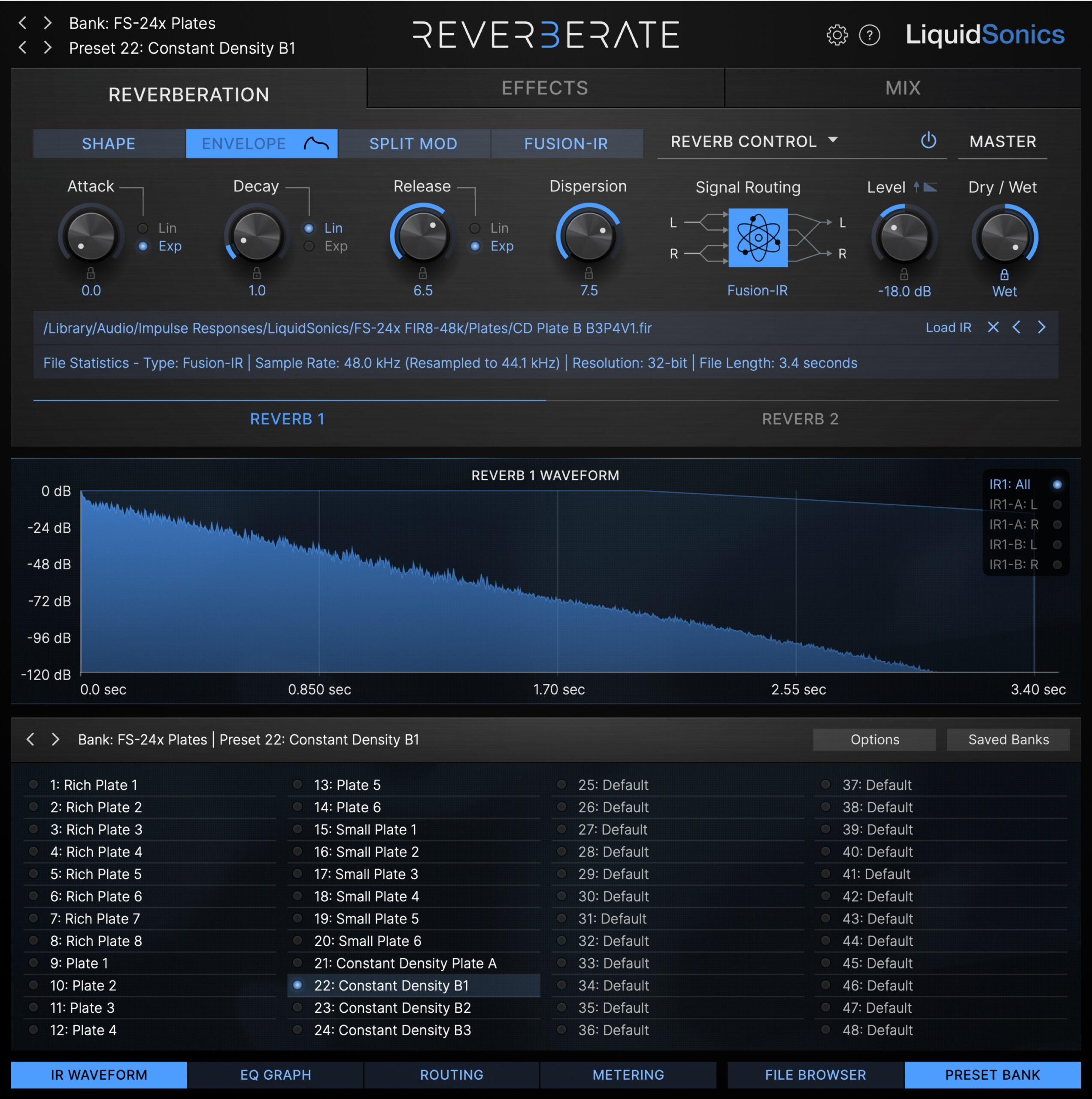 Enter the envelope curve sub-tab by clicking the curved envelope icon to reveal the dispersion control
Select a classic plate reverb, such as Constant Density Plate from the FS-24x bank
Add dispersion to the capture using the dispersion simulation control

Now you have the power to add dispersion to any capture in your library, it’s time to get creative with it. A great place to start is with chambers, often these have a very coloured tone, a fast build-up of reverb due to the room’s small size, and a very dense tail – these are characteristics shared with plates so you can get some very usable plate-like reverbs in this way.

Looking more broadly across the banks available beyond just the plate captures, you should have good results using the Ambience algorithm patches from FS-48 (see the Post category) and many of the M7’s presets as these have very dense and well-defined early reflections that should reveal dispersive properties clearly.

Another interesting way to use dispersion is for special effects purposes. If you have a reverb with a lot of very easily discernible echoes within the reverb itself due to broadly spaced early reflections you will hear the dispersion effect easily on each of the delays if they are fairly impulsive in nature (i.e. with a short sharp attack). Taken to extremes this can create a laser gun kind of effect, which can be useful for creating special effects reverb sounds. You could even combine multiple similar captures in this way and then use the mix modulation to add some gentle motion to the dispersive strikes.

To upgrade from v3.0 just download the Reverberate 3.1 installer for your system and run it to install the updated plug-in over the top of your existing installation.

I hope you find the dispersion feature an interesting and fun addition to your reverb design toolkit!