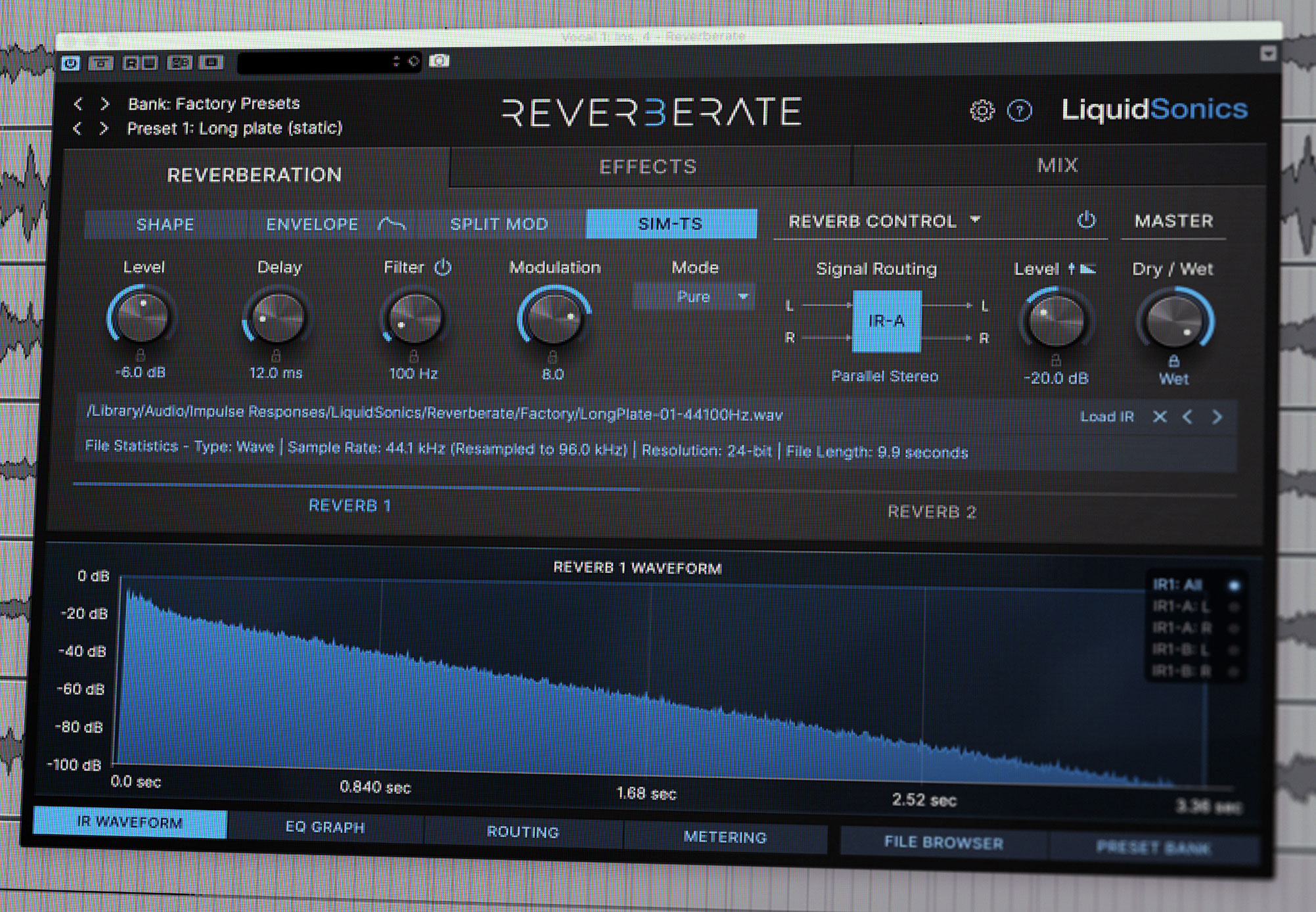 The topic of cross-feed in reverberation might seem like a very specialist area, but it is in fact very simple to understand and plays an important role in how effective the spatialisation is and how well a reverb envelops a source. When we refer to the stereo capabilities of reverbs we tend to group them into one of two categories:

Devices like the PCM60 had a mono input and generated decorrelated stereo reverb output channels by taking taps out of the reverb loop in different places and routing those to different channels. It is an elegant and convincing way to create two reverberant outputs from a single input. It provides an extremely convincing stereo reverb for mono sources since it is a quite effective ‘up-mixer’ creating stereo sound from mono.

Most reverbs are stereo devices, they receive a stereo input and produce a stereo output. The inputs often feed into the same reverb ‘tank’ at different places so each of two inputs has a different path to reach each of two outputs. This creates what is known as a true stereo effect, there is cross-feed between the channels which produces very good better spatialisation.

Of course this is important for stereo recordings, but even with mono sources it is very important as stereo reverbs behave naturally when a source is panned naturally bleeding a signal between channels at a level that will make sense in the context of a mix.

To correctly sample a true stereo reverb, we require a stereo sampling of the stereo outputs in response to only the input to the left channel, and another for only the right input channel. This is so that we know how the signal feeds into the opposite channel. Hence true stereo convolution requires four channel captures and four processing paths:

Often the first are provided into a single stereo file, and the second are in another stereo file, but they can be provided as a quad (4 channel) file. Occasionally a true stereo device simply was not sampled in this way and only a single stereo file is available, so the information about how the device is cross-feeding audio is lost. With devices like some plates or old reverbs that are inherently mono it is just not possible to get a true stereo capture.

The crossfed channels of a true stereo reverb are usually at a slightly lower level (by around 6dB) and usually offset by a small delay (8-12 ms or so). There may also be some additional filtering involved and the channels will be usually be well decorrelated.

New for Reverberate 3, modulation can now be applied to the crossfed channels to improve its liveliness on the indirect paths without compromising the accuracy of the direct channels. This can even be combined with the split-modulation facility for extra modulation depth.

Hover or click the hot-regions below to see more details about the simulated true stereo tools available in Reverberate 3. 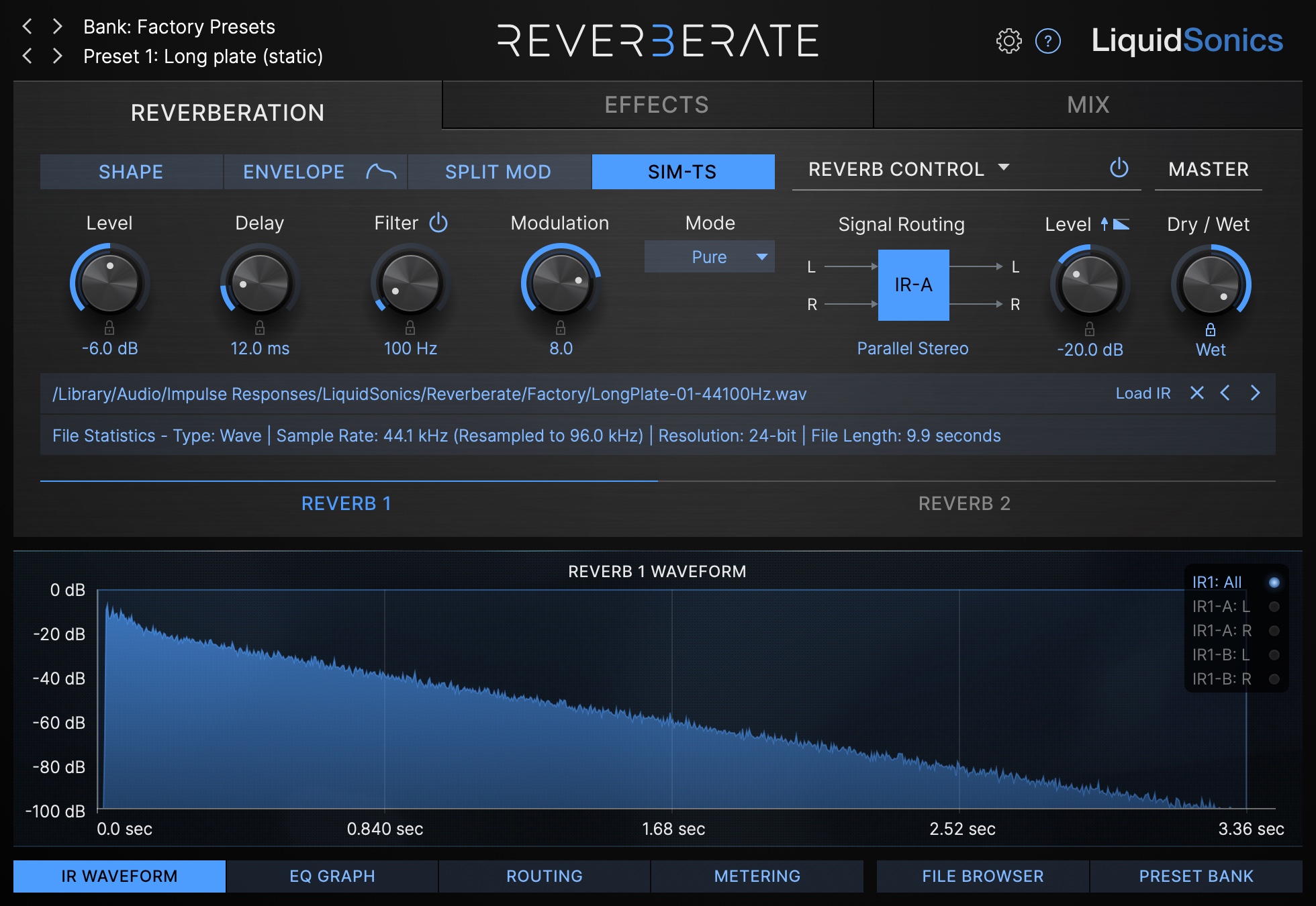 Select a stereo impulse response
Navigate to the simulated true stereo tool
Typically cross-feed channels are lower in volume than the directs, select around -10db to -6dB
Cross-fed signal is usually delated by around 10 milliseconds for good spatialisation
To reduce low end overwhelming the crossfed channels on some sources like plates, you may apply some gentle 12 dB / Oct high-pass filtering
For a subtle enhancement of the reverb, dial in some modulation (a natural, non-pitching type)
For very low delays, you can apply the dense type which applies a decorrelation sequence to the cross-fed path ensuring there will be no phase artefacts. For longer delays the pure type uses a very natural sounding non-pitching modulation effect as found in the split modulation facility.