By LiquidSonics15th November 2022No Comments 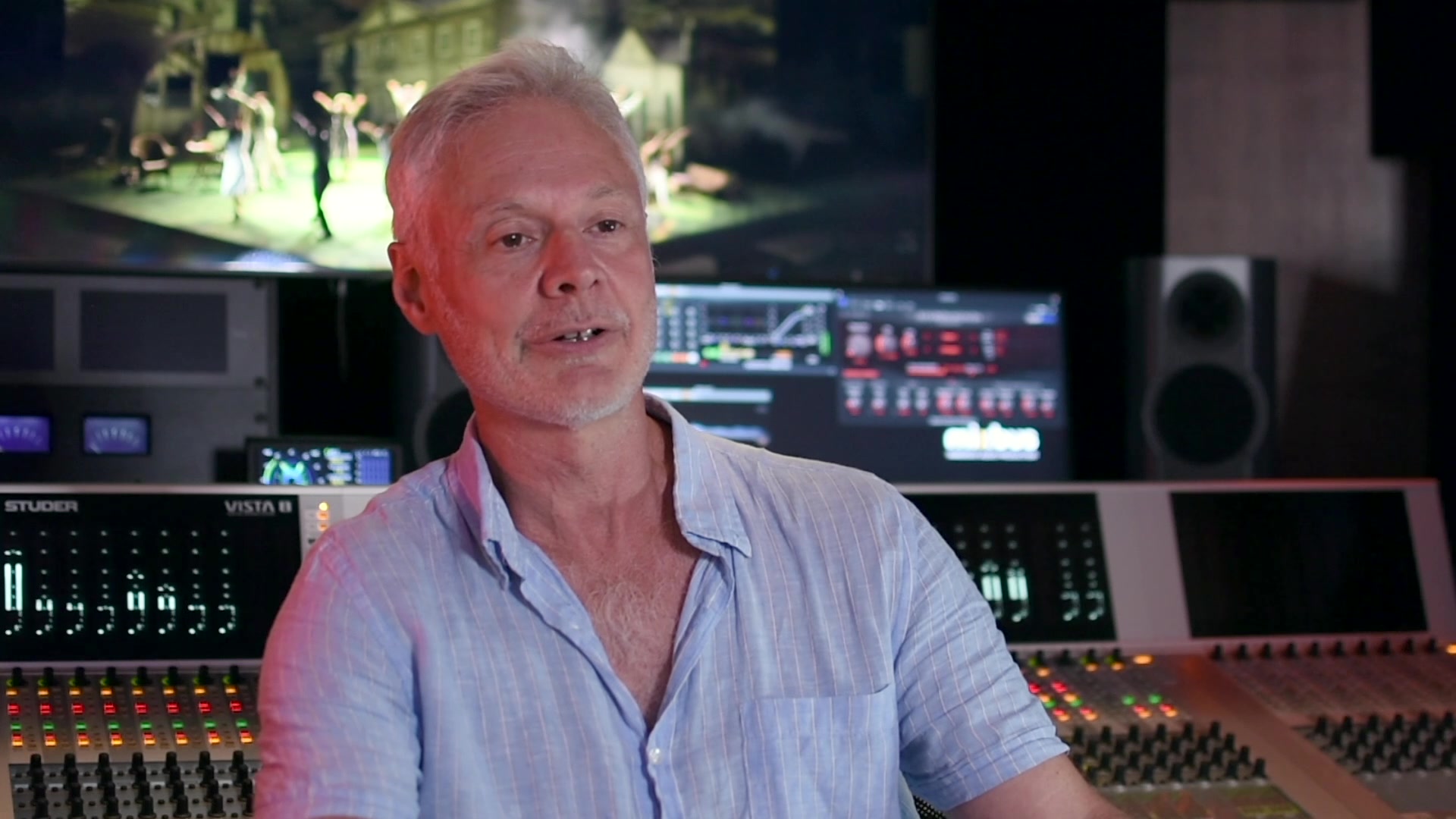 Having previously worked as a sound supervisor for the BBC, Conrad Fletcher is one of the industry’s most experienced broadcast and live engineers and producers. He is also the brains behind The Mixbus – a state-of-the-art location recording vehicle specifically designed to produce up to 5.1 audio for TV shows and live productions/events. Based around a Studer Vista 8 console and Barefoot monitoring, the truck has been involved with some of the most prestigious shows of the last few years including the BBC’s Later… With Jools Holland, The Olivier Awards, numerous National Theatre Live shows and many others.

When we heard that Conrad is a big fan of LiquidSonics’ Seventh Heaven Professional, we arranged to climb aboard the Mix Bus with him to discover how and why he started using the reverb software.

What is The Mix Bus?

The Mix Bus is a large format audio recording and broadcast truck. This one has been specifically designed for live to cinema events. This is a long evolution of several OB trucks that I built over the years, all audio specific right from when I was at the BBC in the eighties and nineties and ran one of the mobile recording trucks – the SCV 6 (Stereo Control Vehicle 6), which was a 28 ton vehicle with two Studer A80 24-track machines on and SSL 4000. As I got older, the gears started getting smaller, more capable, and more sophisticated. This particular truck is seven and a half tons and it has huge capabilities. We use MADI with this so you can have 64 audio channels on each MADI and we can handle maybe five or six hundred inputs on this.

We did a Later With Jools Holland 25th Anniversary Special, which had 540 inputs on it, and that that was handled relatively straightforwardly.

What Inspired You To Build A Mix Bus?

What really inspired me to build The Mix Bus and its sister truck, the AUX bus, which is a smaller version, is wanting to be at the leading edge of everything that’s good about modern pro audio and be at the cutting edge of the latest developments, producing sound that is as good as we can possibly produce.

Bricasti reverb is increasingly common in live audio rig and we are seeing more and more people instagramming shots using LiquidSonics Seventh Heaven live. Could you talk about why the Bricasti reverb is adopted for live work?

A lot of the live to cinema stuff involves control of perspective and dynamics, and in order to do that we radio mic actors. We tend to radio mic actors normally in the hair or in the clothing so it’s hidden but the camera shots obviously can be very close, or they could be massive wide shots with someone in the distance, so we need to be able to control the perspective with a mic that is absolutely fixed to the person’s head. The way we started doing that is at the beginning we used just float mics and put ambient mics in everywhere and used those. That didn’t work massively well because if you had a very loud actor next to a very quiet actor, the loud actor would sound like they were in another room and the quiet actor would sound like they were very tight.

So that led us to the TC System 6000 and the Lexicon PCM96 Surround, basically every major reverb, including an old Lexicon 960, we tried out and all of them were in varying levels ok but nothing great. It’s amazing how sophisticated your ear is in just hearing a tiny bit of it. It is really a tiny bit of a kind of ambience around the mic to make it sound like it’s not radio mic’d but instead a 416 or a gun mic in a classic film position of two feet away.

We were despairing and then my colleague Chris Kalcov said that he was using Bricasti and Seventh Heaven as his reverb of choice. He does a lot of classical stuff, and is very particular about what he uses so I thought I’d give it a go.

First of all, we bought a hardware unit, and it was a revelation, it was basically the reverb we were looking for in our heads. So while it’s not actually real and it’s not impulse response, it’s the ideal thing that we wanted, which just seemed to bed in. It just seemed to become part of the picture rather than something that we were painting on over it, and with that came Seventh Heaven. Seventh Heaven is so close to the hardware reverb that we can use them almost interchangeably. I don’t understand how it manages to embed itself in the signal, it is just amazing, it just fits for what we’re doing.

There are stylised reverbs, like the Lexicon, which are good for pop music particularly, but Seventh Heaven seems to be a good fit for pretty much everything. We’ll do concerts and festivals one week, and then we’ll do classical opera another week, followed by quite a lot of live cinema events, and the reverb just seems to fit everything. This is the culmination of twelve years of looking for the right reverb.

We use it in a very specific way. Particularly on location running a plugin is so much easier in terms of hardware, weight and all that kind of stuff, but also it’s automatable and this is what we do here. We’re actually running Seventh Heaven as part of a MainStage setup, and all the speech goes into MainStage. We have a MIDI fader on the desk which we use to control the reverb, direct balance, pre-delay time, the amount of high frequency and low frequency roll off, all with one fader. We basically have a near and then the last 10 dB is a proximity effect so we actually wind in a lot of bottom end to simulate a microphone that’s really near.

In terms of Cinematic Rooms, one of the problems with doing live to cinema is that we could get 64 tracks of sound effects which are all dry, and the way they work in the theatre is they play the sound effect into a speaker. For example, if you want the sound of a baby crying, you would have a speaker underneath a crib and the dry sound would come out of the speaker underneath the crib, so the audience would hear it as if it was an actual baby. Because we are getting those sounds at a source, we need to stick them into a reverb device or a virtual room to simulate that kind of effect. With Cinematic Rooms there are so many different presets in it we’re still going through them, but there seem to be an almost infinite number of ways of achieving something that is satisfying.

As you move more and more towards software, what is the impact on your workflow?

Software versions of things, particularly reverbs, are a great liberator, really. The reason we’ve got this truck, and we’ve got so many faders is mainly for live sound work. You could do what we do on the laptop if you had enough time to do it. What we do is we rehearse, we need a fader per channel, and here there are six different layers, so we’ve got access to 200-odd faders, which you really need on a live show. The beauty of having software and recording systems like Nuendo is we can take away what we are doing and we can simulate it. If we need to do post production, we don’t need to use the truck because a lot of the software on the truck can be pulled off onto a computer.

It’s much easier now to tidy things up and to make them better without needing to plug into lots of different hardware systems or try and level match things that were avoided before. So I do love software. I love being able to record something on a truck like this that’s half a million-quid worth of stuff and then edit it on the train, on the laptop, as if I was on the truck with AirPods.

It’s amazingly liberating and I get really excited about the creative possibilities of just being able to refine things.

All of the LiquidSonics reverbs are available to try for free for 14 days, just head to our demos page to drop a code into your license manager and pick up the installers from the downloads page.

If you like what you’ve seen and heard our reverbs are available in the LiquidSonics store and don’t forget that existing customers can use their loyalty discounts for some incredible stackable savings.