The first feature update for Cinematic Rooms Professional is here and introduces chorusing – a fantastic way to adding even more richness and body to our flagship Atmos reverb. For more information about the chorus feature, and audio demos and information about maintenance fixes (these fixes also apply to the standard edition) please read on… but first a little history.

The History Of Chorusing In Reverb

Algorithmic reverbs are built using a series of feedback delay loops – audio moves around them hitting attenuators, filters and delays. The audio is then read out of the loops at various points on the journey creating a thick, luscious reverberation full of body and character. Within those loops the delay lines can be modulated in various ways, some of which cause small pitch fluctuations that we hear as chorusing. It doesn’t suit every source, but adds an unmistakable richness to others.

Originally, chorusing was generally added to break up resonances that could be heard in old reverbs due to the extensive use of all-pass diffusers and short/limited delay lines. The all-passes were typically there to increase reverb density, itself a side effect of not really having enough delay memory or processing power to do as many reads and writes into the delays as the engineers would have liked. Simulating a real room takes millions of delay line reads and writes per second, so the algorithms had to find creative ways to do this with less work.

Of course real rooms do not exhibit chorusing as they are fixed in place, but in music we can get away with little side effects like that if they sound good. The original Lexicon reverb, the 224, is absolutely full of chorusing. Even D-Verb piles on the chorusing in some of its algorithms! If you listen to a vocal or piano through the classic concert hall algorithm on a long tail with the chorusing cranked high you will hear chorus building up as the audio passes though pitching modulators over and over again.

The modulation in a Lexicon 480L is designed specifically to avoid pitchy chorusing, Random Hall for example sounds a lot more crunchy as the delay lines fade in/out and shuffle around at higher values of spin and wander. The modulation in Cinematic Rooms is designed to be subtle, just there to enhance the perception of a space being alive without the modulation drawing attention to itself as it does in many of the older designs (it also helps to avoid colouration).

About Chorusing In Cinematic Rooms

The Cinematic Rooms reverb algorithm shares plenty of heritage with the classic techniques, albeit with a lot of novel processing advances within the delay loop structures. I have taken the opportunity to introduce some gentle delay line modulation to further fulfil the potential of the underlying Cinematic Rooms algorithm. This means that some of the iterative chorusing that can be heard in other reverbs is now possible to achieve in Cinematic Rooms too.

The new modes are designed to be fairly subtle, I didn’t want to go for an incredibly thick ensemble chorus on this product because it is important to retain the clean, pristine reverberation that Cinematic Rooms is known for, there are other opportunities to explore that type of reverb coming soon.

You probably don’t want to use much chorusing all that often, but on the right sources like synths, vocals, guitar and electric piano it can really add an extra dimension. A little thickening from chorusing can go a long way!

Adding a chorus using a reverb is very different to just adding a chorus on your bus before or after a reverb. This is because the chorusing builds up over time throughout the loop. It stacks on top of the last round, but the inherent delay between those rounds means it interacts differently each time. You can also isolate chorusing to just the reverb, just the reflections, or a certain mix of the two. In Cinematic Rooms you can even prevent the chorus from being heard on the initial moment of the reverb tail if you so wish, delaying the onset so that it blooms later on in the decay.

To enable chorusing in Cinematic Rooms Professional just click the new downward pointing arrow in the mod section and then select a chorusing mode. This will switch in chorusing in addition to the standard modulation techniques, and from here you can dial in more or less modulation which will now include chorusing as well. 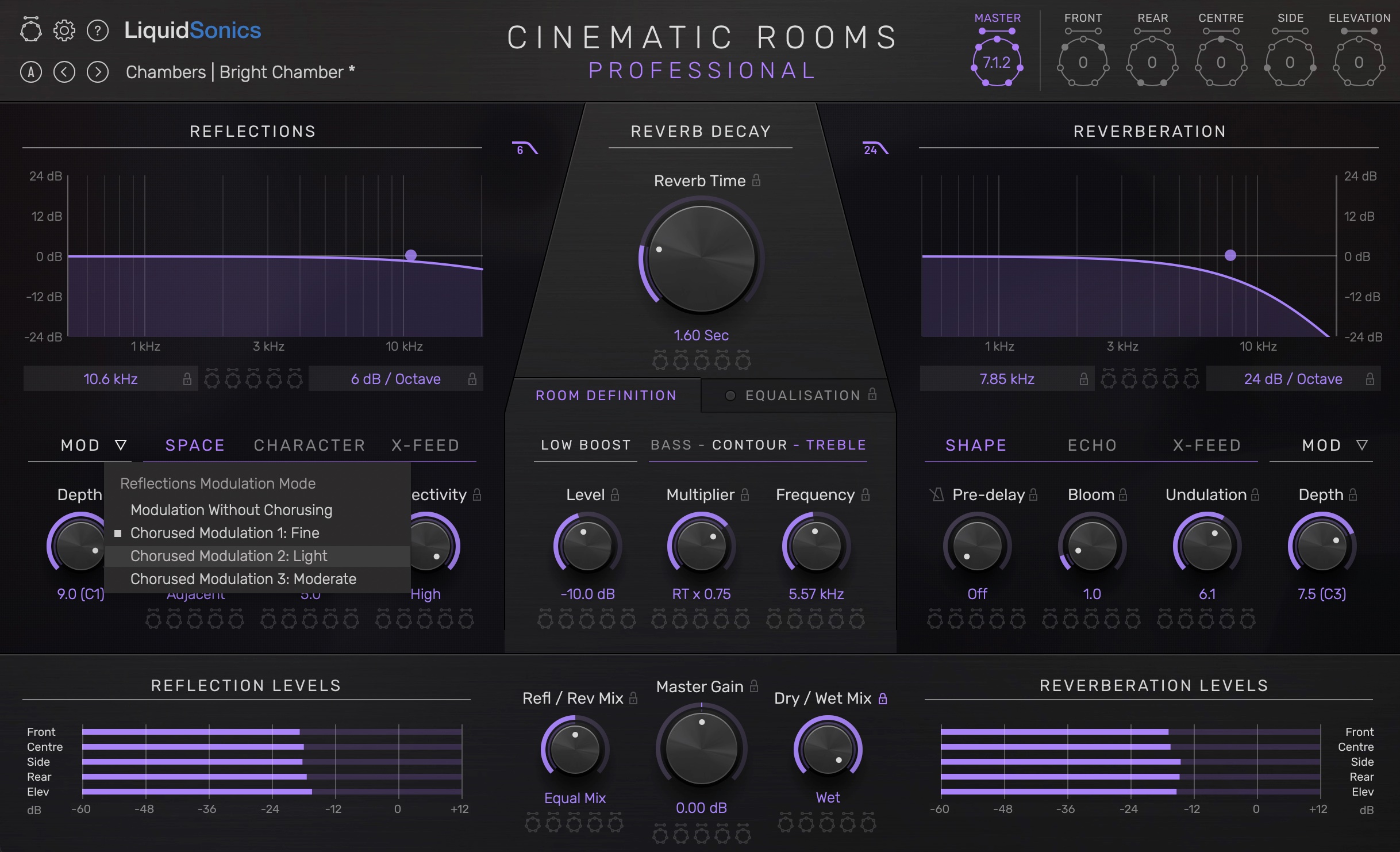 Click the downward pointing arrow to access the chorus menu
Select a chorusing mode
When chorus is active, the selected mode is indicated as C1/C2/C3 after the depth value
Click the lock icon to retain chorus state when changing presets

Check out some of the audio demos below to hear a selection of guitars and electric pianos with and without chorusing on the reverb. The reverb is mixed a lot wetter than usual, and the chorus has been dialled up a bit too far as well, but all with the intent of illustrating how you might use the new tools at your disposal.

If you like the sound of the demos in stereo, please take a listen in surround – the chorusing is synchronised across the stereo field so it really comes alive in multi-channel!

The presets used in these examples are included in the factory Spaces bank (Acoustic Guitar Chorus, Electric Guitar Chorus, MK1 Rhodes Chorus, Wurli Chorus), but if you would like to use the with/without chorus variants you can download them as user presets here, extract the zip, and then drop them into your user presets folder (this is accessible from the presets menu, then “Manage User Presets”, then “View User Presets”).

You can listen to many more audio examples on the Cinematic Rooms product page.

Other Changes In v1.1

Other minor changes have been made to improve compatibility in DaVinci Resolve. A side/rear flip mode added to the settings for improved compatibility with MPEG formatted multichannel tracks and the plugin now functions as expected on 7.1.2 format Atmos tracks. In selected hosts an informal 16-channel mode can also be used, the extra two channels appear in the Elevation plane (available in VST builds only).

The audio unit has also been upgraded to function in 7.1.2 and 7.1.4 in Logic Pro 10.7, and channel ordering has been updated to reflect Apple’s latest update for 5.1 and 7.1. To access the new channel formats in Logic Pro you may need to perform a “Full Audio Unit Reset” operation from Logic’s Preferences / Plug-in Manager tool (otherwise the plug-in may only still be available in ‘multi-mono’ mode which does not benefit from the full surround propagation capabilities of Cinematic Rooms).

Just head over to the downloads page and pick up the v1.1 update and install it over the top of your existing installation. It is fully backwards compatible with the original release, although you will need at least v5.4.0 of iLok License Manager (available here). I hope you enjoy using the new chorus modes to add an extra dimension to your reverbs!