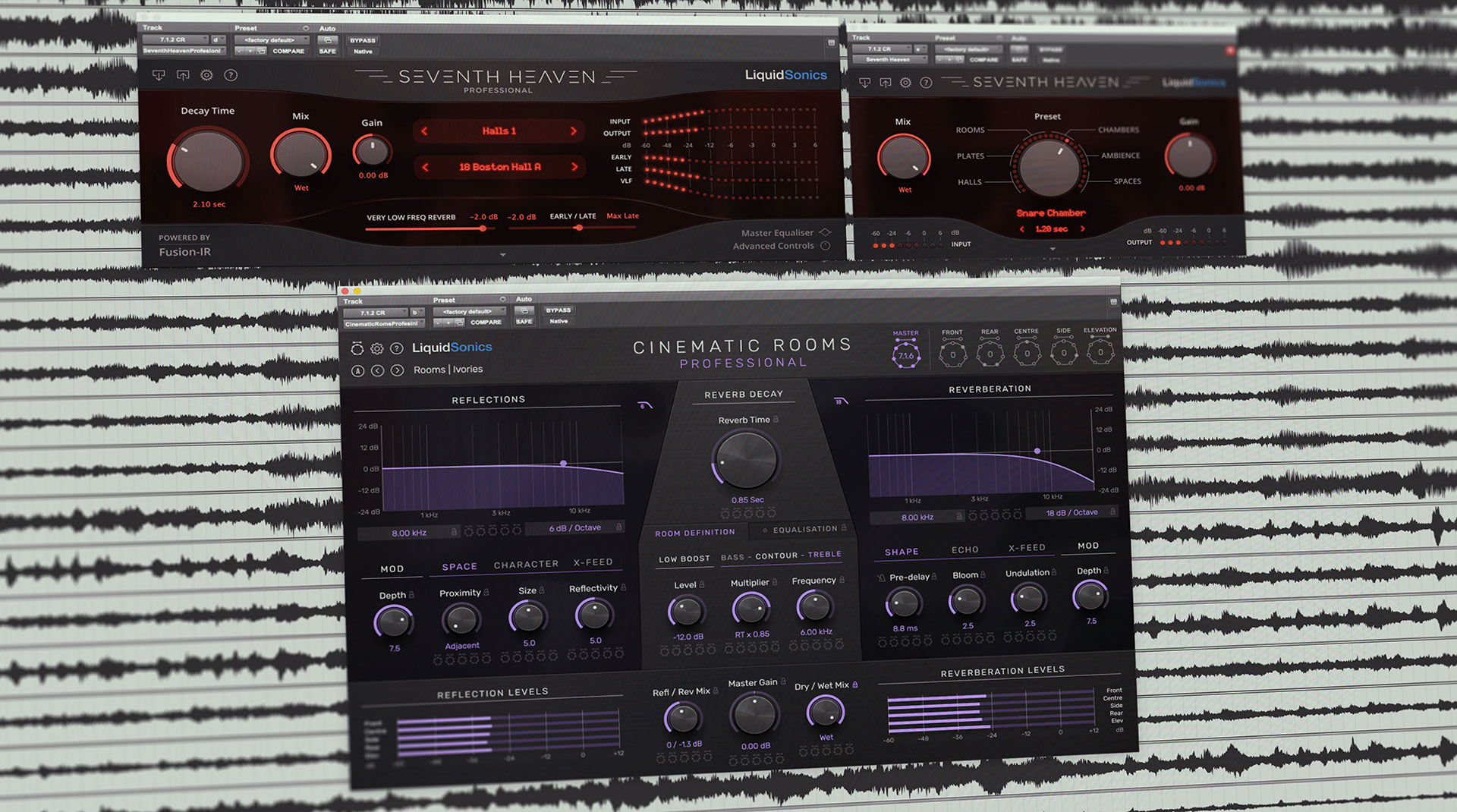 With various reverb types available to the producer looking to give their instrumental and vocal parts ambience and spatialisation, knowing the differences between them is a must. Although you’ll occasionally come across the relatively esoteric likes of non-linear, shimmer, gated and reverse reverb in your musical travels, for the vast majority of your ’verbal needs, you’ll find yourself gravitating towards these six ubiquitous standards.

We discuss these in this article and check out the audio samples for an acoustic illustration.

The de facto standard among reverb algorithms, room reverb emulates the acoustic characteristics of a small, above-averagely reflective space, and so is quite short and dense, slightly tailored in its frequency response, and fronted with audible early reflections that quickly develop into the late tail with very few discernible echoes. Of course, chambers and halls (see below) are also ‘rooms’, but the term is used specifically to describe smaller spaces.

In the LiquidSonics catalogue, Illusion and Seventh Heaven are homes to a wealth of fabulous rooms, but unsurprisingly, it’s Cinematic Rooms that sits at the very top of this particular category, providing all the tools you need to design truly stunning virtual rooms in stereo and surround formats. We are all very familiar with the way a wide variety of rooms should sound because we spend so long in them every day – a lot of time went into perfecting the spectral properties of the smaller spaces in Cinematic Rooms, so it is ideal for post production duties where small and realistic rooms are called for but a sampled capture is not flexible enough or isn’t available for use in surround.

Before the invention of the plate, the echo chamber was the only option for creating artificial reverberation in the studio. The signal to be ’processed’ was routed to a loudspeaker placed in a small, highly reflective (plastered, sometimes painted) room, and recorded back through an accompanying microphone, yielding a tight, frequency-rich reverb, the precise shaping of which could be altered by moving the mic and speaker around in the chamber.

Legend has it that some chamber reverbs sounds were so sought after years ago that you could even phone-in your audio via telephone to be remotely played back and recorded for a mix.

Despite its comparatively archaic origins, chamber reverb remains wholly relevant in contemporary music production, and is thus well represented among the algorithms and models of today’s plugins. Similar in scale to the room reverb but usually much brighter with reflections building even more rapidly into a dense tail, and less in the way of colouration and specific character, the chamber is arguably the most versatile reverb type of all working well on just about anything but being among the first ports of call for vocals (Cinematic Rooms | Female Vocal | Chambers | Vocal Chamber), guitars (Reverberate 3 | FS-24x | EGTR Lead FS-24 Rich Chamber 6) and drums (Cinematic Rooms | Drums | Chambers | Overcast). Again, there are plenty of quality chambers to be found in LiquidSonics Illusion, Seventh Heaven and Cinematic Rooms. Many of those in Cinematic Rooms are based on the tonal qualities of some classic chambers in the real world.

The largest of the conventional reverb types, hall reverb is used to simulate concert halls, auditoriums, theatres, churches and other vast spaces, and is defined by its long early reflection and decay times, gradual tail build-up, and complex decay shapes.

The lengthy decay makes it particularly amenable to modulation, as definitively demonstrated by Lexicon’s most famous and influential algorithm ‘Random Hall’ from the 480L – positively alive with movement; or the 224’s ‘Concert Hall’ with its rich and evolving tails. Tail modulation is often applied by the producer to imbue the tail with an organic sense of movement and natural variability, but its origins were largely due to the need to break up the noticeable resonances and repetitions inherent in the early lower density reverb designs when set to larger sizes.

Clearly, then, hall reverb, with its potential to swamp any unprepared mix, should always be handled with care. The M7’s VLF (very low frequency) reverb is carefully tuned to avoid overwhelming the low end with rumbling bass in these larger spaces, so Seventh Heaven is always an ideal choice for this type of reverb but for a taste of those classic modulated halls dive into the FS expansion packs for Reverberate 3.

The M7’s v2 algorithm presets are much brighter and exhibit much more motion than the v1, this algorithm was introduced in the second firmware revision as a nod to the original designs like 480 which were typically using lower order roll-off filters in their hall designs following requests by Bricasti’s early cohort of enthusiastic supporters. Even the M7’s delay incorporates modulation. Whilst Seventh Heaven is limited to the superbly realistic v1 presets for which M7 is best known, you can find every M7 v1 and v2 preset in Seventh Heaven Professional and those v2 captures are well worth exploring when you are looking for a little extra liveliness in large spaces and halls.

The original ‘mechanical’ reverberation device, in the physical world the plate reverb – as the name suggests – takes the form of a big, heavy sheet of metal, suspended on springs in a wooden frame. An input signal generates vibrations in the plate via an attached transducer, and those vibrations are captured as an audio signal (the reverb) by an also-attached pickup. The first plate reverb was the legendary EMT 140 (launched in 1957), and plate emulations feature among the algorithms of many reverb plugins, including LiquidSonics’ Illusion and, of course, Lustrous Plates, which offers no less than seven classic models, the 140 among them.

The bright, vibrant sound of plate reverb makes it hugely effective on snare drums (LiquidSonics – Lustrous Plates – Drums – Rhodium Plate Snare Verb), drum kit overheads and vocals (LiquidSonics – Lustrous Plates – Vocal – Silver Plate Medium Vocal), which it helps to give a real sense of presence in the mix. Indeed, there’s no reason not to give that characteristically lustrous sheen a try on any source material – although it is important to appreciate the fact that, being about as high-density as reverb gets, and completely free of early reflections, plate is anything but natural sounding and therefore not a good choice when environmental realism and/or spatialisation are priorities.

Watch out for the decay of a plate which can be very low-end-heavy, corrective EQ is often required (the famed Abbey Road technique was leant on as a direct consequence of these qualities in many of the recording studios that picked up these metallic monoliths).

Also based on a vintage mechanical design (vibrating springs in a metal box, invented as an affordable way to build reverb effects into Hammond organs and Fender guitar amps), the spring is the most overtly artificial sounding of all reverb types – uniquely dark, clangorous and ’sproingy’. A defining element of surf rock and intrinsic to the sonic styling of classic dub, spring reverb isn’t something you’re likely to turn to often outside those genres, as it’s just too idiosyncratic to use for general spatialisation unless used extremely sparingly.

Still, it’s an obvious choice for giving sample-based virtual guitars and organs a vintage sound, producing reggae-inspired drums, and experimenting with unusual reverb treatments on keys and other instrumentation.

Convolution reverb recreates the sounds of real acoustic spaces and studio hardware devices through the use of sampled impulse responses captured directly from them. All of the reverb types above can be generated using both algorithmic (ie, entirely maths-based) and convolution (ie, ‘sampled’) methods, but convolution has the advantage of 1:1 representation of the space or hardware in question, and really comes into its own in the conjuration of totally convincing real-world environments that just couldn’t be reproduced algorithmically. On top of that, LiquidSonics’ Fusion-IR technology addresses the main drawback of convolution when used with modulated reverbs – its static, unmodulated nature – by deploying multiple simultaneously-processed reverb streams. Fusion-IR convolution technology features extensively among LiquidSonics reverb plugins, from Reverberate 3’s panoply of hardware emulations and the sumptuous Bricasti M7 recreation of Seventh Heaven, to Illusion’s gorgeous rooms, halls, chambers and plates!

There are many more reverb algorithms that we didn’t get to in this article, and you need to look no further than Reverberate 3 to keep exploring. Check out the classic Ambience in the FS-24x expansion pack. For some nonlinear reverbs take a listen to some authentic RMX16 IRs in this third party IR set or the “Inverse Room” presets from FS-24x’s Rooms bank which was designed with this sound in mind.

Pro Tools Expert recently ran a reverb poll and nonlinear reverbs came flat last by a significant margin, so if you’re looking for a reverb that stands out from the crowd non-linears are definitely something to check out!