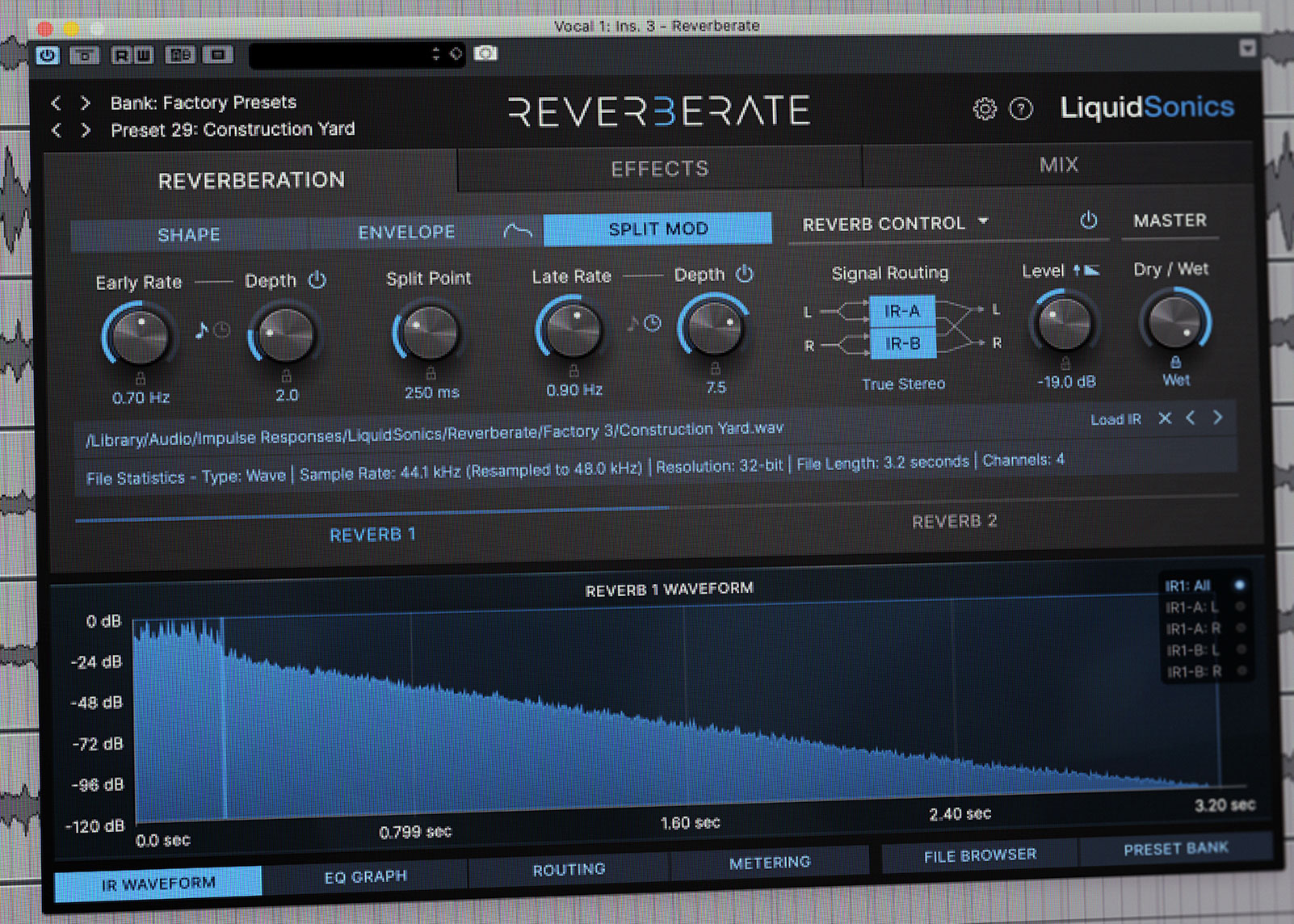 Although some well known reverbs like the QRS or RMX16 have no modulation at all, many of the classics like the 224 or 480 loved by producers exhibit modulation features that bring them to life (you can read more about modulated reverbs in this article on Fusion-IR). The problem with static captures of modulated reverbs it that is can be quite difficult to retrospectively revive the liveliness of the reverb in a natural way.

Reverberate 3 allows you to apply up to two independent types of modulation to an impulse response. At extremes this can produce interesting creative effects, but when used more subtly will bring the reverb alive in a way that is felt rather than heard (since it modulates without dramatically affecting how you will perceive the reverb structurally or tonally). We touched on some of these features in the last post where the split modulators were used with some RMX16 impulse responses.

Two types of modulation are available in the split modulation (split-mod) facility:

You can also use the second type with the simulated true stereo facility.

In many cases reverb reflections are not modulated (M7 being a notable exception). Reverberate 3 allows you to select a split point that corresponds roughly to the division between the reflections and late reverb and run them through individual modulation processes. In the capture below this split is taken at 250 milliseconds (we see no more individual reflections peaking above the decaying tail after this point so it is a good place to choose the split). 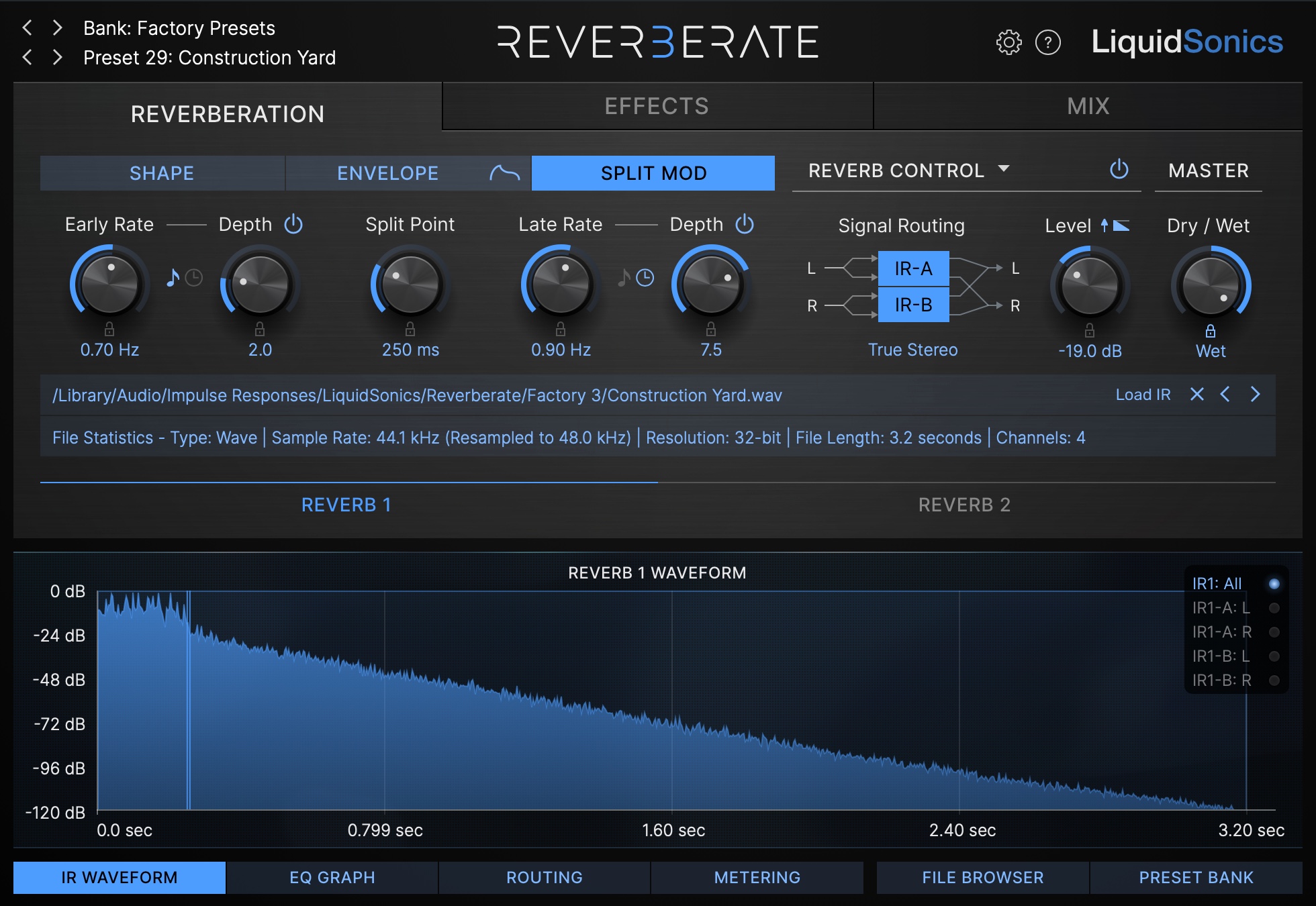 Select the position in time between the two modulation sections (early and late)
The split point has been selected so that the visible reflections are to the left and the remainder of the reverb to the right
Modulation without pitch shift has been selected, this causes the tail to modulate gently in a way reminiscent of high end classic reverbs whilst avoiding pitch effects that can cause trouble with some sources such as pianos
For a more dramatic effect, the note mode can be selected to cause this region to pitch shift during its modulation

By selecting the non-pitching modulation effects at different rates and depths the regions identified as early reflections and late reverb will gently modulate independently creating a very pleasant hardware-like sound.

For a more dramatic effect you could try pulling the split point back to around 100ms to catch just the initial reflections and then switch in the pitching type modulation for the remainder. This will make the reverb sound much more energetic in the early region, and with only a very short burst of pitching modulation you will often be able to use this effect on a wide variety of sources without pitching it excessively. Any chorusing that affects pitch will be less often useful with sustained natural sources like piano but on strings, synths or vocals try it at low depths and gradually increase the depth until you have a pleasant thickening chorus effect.

The split modulation feature is very useful if you do not have a Fusion-IR capture for a modulated reverb as you can typically restore some of the original character, but alternatively consider using it with reverbs that were originally devised as static devices like a QRS, RMX 16 or even a hardware plate reverb. Pick up some impulse responses online, dial in some split modulation, and take them to the next level in a way a static impulse response or even algorithmic emulation can’t match – get more details in the afore mentioned post here.

You may wish to apply additional or alternative types of modulation to reverbs captured with Fusion-IR; split-mod works here too. You may like to add some pitching modulation to just the early reflections, late reverb, or both. Since most Fusion-IRs are sampled with reflections and late reverb independently, Reverberate 3 is able to apply these effects directly to individual portions of the capture.

This is very useful with the FS-48 sample set because some of the algorithms are static. The Room, Hall, Plate and Rich Plate captures in FS-48 are all taken from static algorithms, but you can modulate the early and late capture components individually with split-mod. 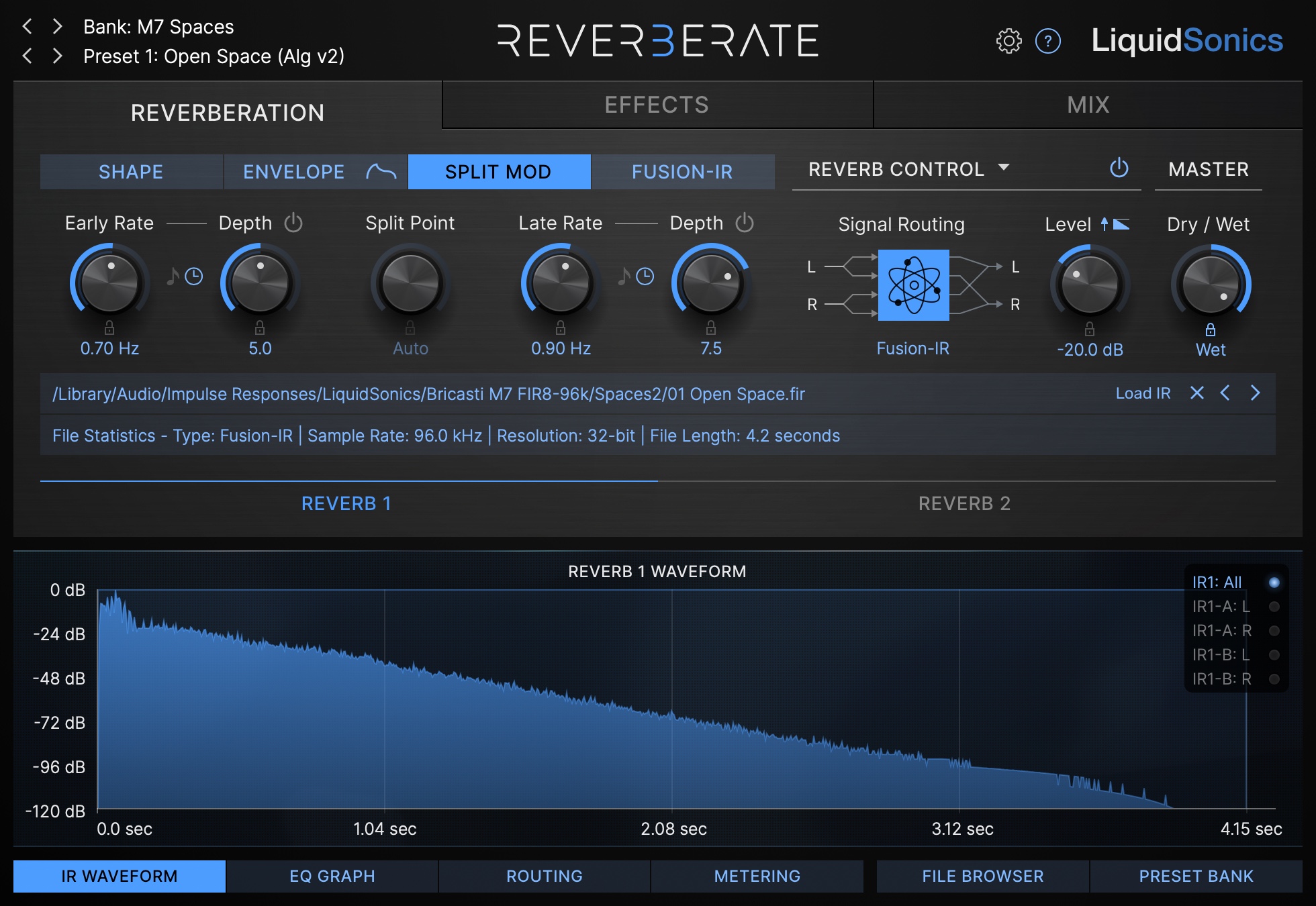 If the Fusion-IR capture contains modulated early reflections you would typically not need to apply the split-mod facility, but you can do so by disabling the built-in early modulation on the Fusion-IR tab first and then enable the split modulation’s early mod facility.

You may apply split-mod modulation and Fusion-IR modulation concurrently for a late reverb component.

An interesting use of the split modulation feature is to recreate the chorusing of classic reverbs such as the 224’s Concert Hall algorithm. Frequency modulated chorusing cannot easily be reproduced with static impulse responses, but by using a low amount of the pitch varying modulation feature on reverb tails (but not the reflections) you can achieve a useful version of this effect with reverb captures. Since Fusion-IRs allow for the reflections and late reverb to be sampled separately the chorusing does not need to be applied to the reflections which would likely be too prominent and not representative of the original as most chorused reverbs do not apply pitch variable chorusing to reflections.

All of the FS-24x pack presets have a small amount of chorusing applied to their late captures as it helps them to sound much more like the original hardware than captures of that unit usually would. Although you probably won’t tell much of a difference with percussive sources, it is easily noticeable on material with longer sustained notes such as vocals and strings adding a great deal of richness and character to the reverb. 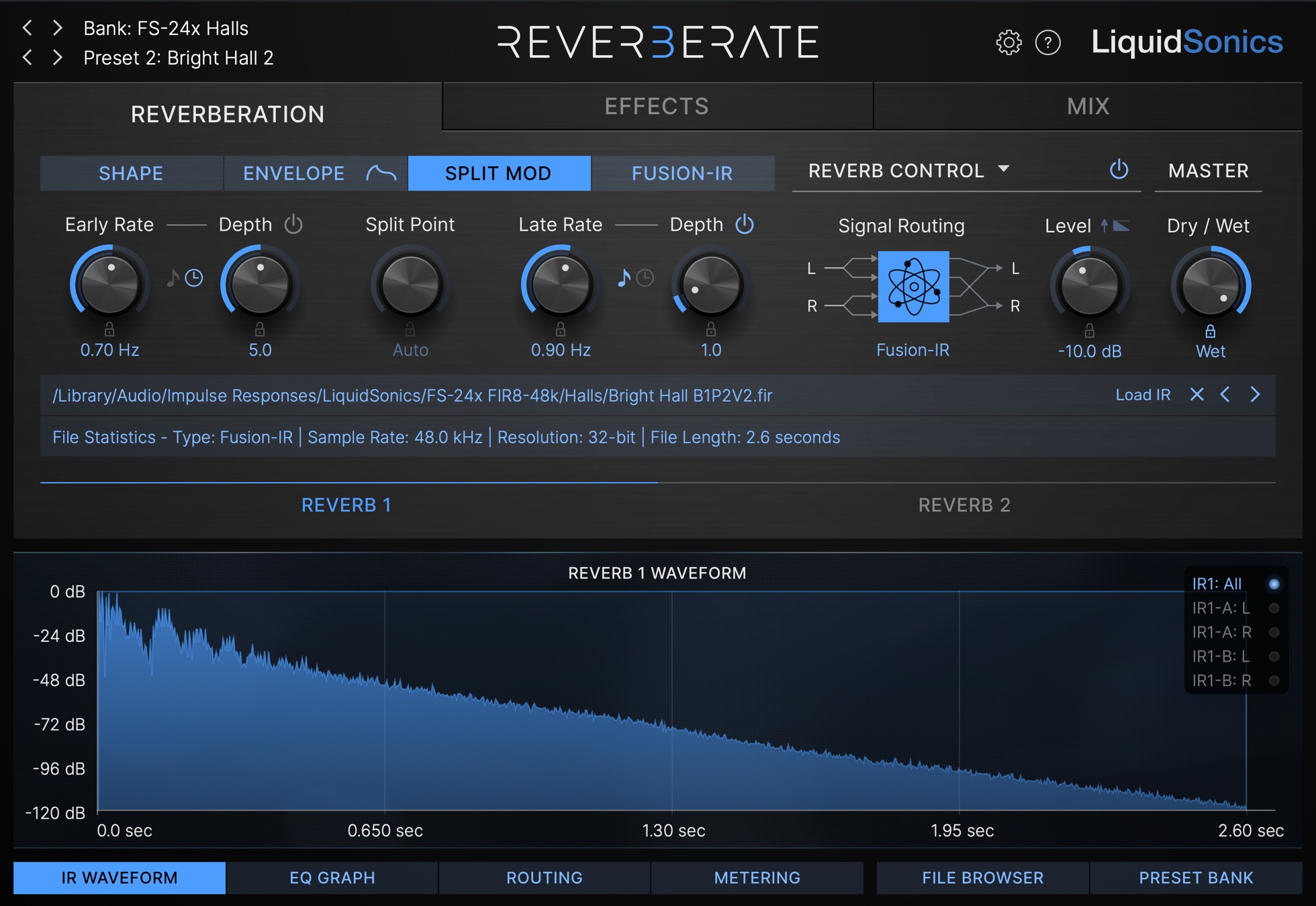 Pick up the free 24x Fusion-IR samples pack
Select the pitch-varying modulation with a fairly slow rate to simulate chorusing
Select a low intensity so that the audio going into the reverb processor modulates gently back in forth with time, allowing it to chorus against itself as happens in many classic reverb algorithms of the 1970s
You could even add some time-varying modulation to the early reflections to allow them to sit more organically against the dry