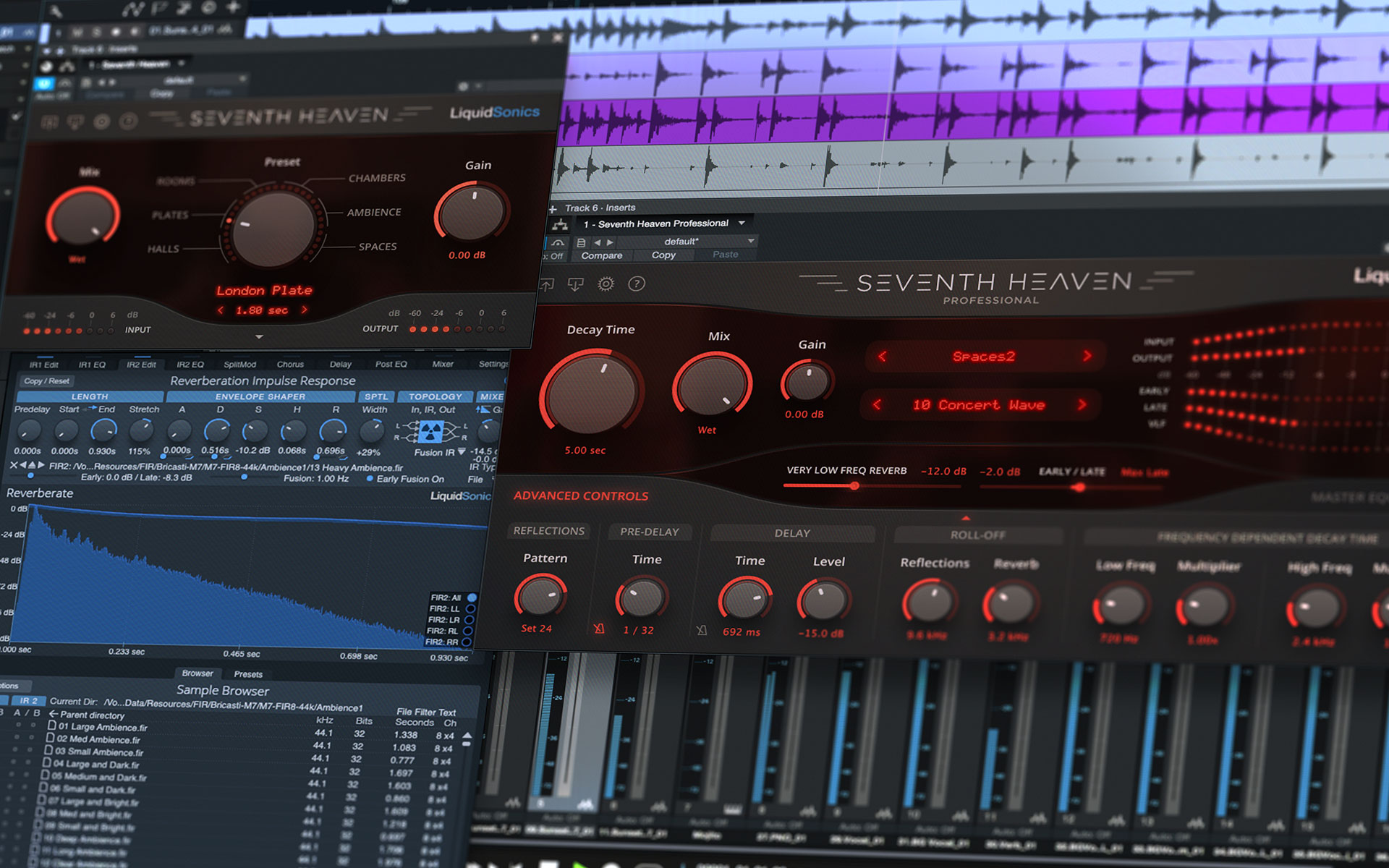 Seventh Heaven, Seventh Heaven Professional or Reverberate 3 with Fusion-IR Captures – Which Is Right For You?

We receive a lot of questions about the differences between Seventh Heaven, Seventh Heaven Professional and the M7 Fusion-IR captures provided for Reverberate 3 and VerbSuite Classics. Matt Hill, the developer of Fusion-IR and owner of LiquidSonics, is here to provide some answers.

Q) What is the difference between using the regular Bricasti M7 Fusion-IRs in Reverberate 3 and Seventh Heaven?

It really all comes down to an improved workflow.

If all you want to do is pull up a great M7 preset and drop it into your mix and maybe tweak the balance between reflections and late reverb, Reverberate 3 has got you covered.

It’s the moment you realise that Sunset Chamber’s low end on the kick could just do with a little more body from the low frequency reverb that you’ll want to pick up Seventh Heaven. Or perhaps you find the reflections’ high rolloff in Saint Gerold need to just open up a little to shine for your soprano’s big moment you realise it can’t be done with a regular capture. How about when you could do with just extending the decay a fraction to better cover the spacing between those staccato violins in Boston Hall? Or if you’re a synth freak, how about turning any M7 preset decay into a 30-second monster? You can’t do that in any other way without a hardware M7 by your side if you don’t have Seventh Heaven.

A traditional IR capture is just a snapshot of a reverb in a moment in time. Fusion-IRs in Reverberate 3 take convolution to the next level by turning those static snapshots into a living, breathing, modulated capture of the reverb. Despite the massive acoustic advances, those are still limited to the preset as it was defined – you can’t really edit them in meaningful ways as in an algorithmic reverb.

To truly experience the workflow of an M7 we kept pushing and through an automated sampling process running twenty-four hours a day, seven days a week, for months we made thousands of samples of the M7’s legendary presets in various states. When you do something as simple as tweak the decay time or open up the reflection roll-off, Seventh Heaven intelligently selects the samples you need to most accurately reproduce the precise behaviour of an M7 reverb.

There are three reverb engines in Seventh Heaven. One for the early reflections, one for the late reverb, and one for the low end. Part of the magic of working on an M7 is the interplay between its reverb engines as you change parameters. Although most people might not have thought about how the different elements in a reverb might be reacting when they reach for a single parameter, a crucial part of the experience for anybody that’s ever used an M7.

We’ll explain a couple of the key differentiators to give you some examples of why regular M7 captures in a regular reverb don’t come close to what you can do with Seventh Heaven.

The very low frequency reverb in an M7 is magical. Whether it’s for mixing drums in pop or subtly supporting the articulation of legendary scoring stages in cinematic ensembles, it’s one of those things in life that does its job incredibly well but just gets out of the way. It’s doing something other reverbs simply can’t do. Specially designed to robustly support the low end in short reverbs and without swamping longer tails, it grows and shrinks nonlinearly with main reverb time in a totally unique way.

That’s why in Seventh Heaven a complete Fusion-IR convolution engine is dedicated to the task of reproducing the modulated wonder that is M7’s VLF. It was sampled independently (no mean feat in itself) and faithfully reproduces M7 parameter interplay to make sure you can experience it as intended.

Pre-delay in the M7 represents the time between the initial dry sound and the onset of the late reverberant field. Some reverbs also delay the early reflections in their pre-delay implementation, but this approach can often dramatically unglue the source from a room’s initial ambience.

Pre-delay in Seventh Heaven retains the crucial relationship defined for the early reflections, the late reverb and the low frequency reverb in an M7 accurately. This isn’t just an in-line delay, it’s intrinsically woven into the fabric of the three reverb engines in a manner that’s only possible in a plug-in that solely focuses on recreating one device as accurately as possible. Try pulling back on the pre-delay and then dropping a classic delay in front of Seventh Heaven and you’ll instantly hear the difference!

The temptation to take one step on from the M7 was simply too much to resist. A software plug-in is always aware of the DAWs song tempo, so you can sync the pre-delay to tempo so crafting rhythmic effects with reverb are a cinch!

As a sound bounces around an environment, every time it touches a wall or even passes through the air, high frequencies are being rolled off in a distinct way. The shape of the filters in a reverb are very carefully designed, so much care was taken to reproduce them accurately in Seventh Heaven.

The M7 allows you to make changes to the frequency profile of the early reflections and late reverb independently, but this is something no capture could ever do as once they’ve been combined; all you could do is filter the capture as a whole. Worse still, once you have filtered away high frequency content there is simply no way to reproduce it with traditional filters. Sure, you can boost what’s still there, but the high-end content is gone forever so the limits are reached very quickly.

To truly recreate an M7 workflow it was essential to allow a producer to open up the roll-off filters of the early and late reverbs independently. That meant taking exacting measurements of the frequency profile of the M7’s reverbs in every single position. A huge undertaking when you consider that the early reflection engine and both of the v1/v2 late reverb engine modes (this is determined by the preset selected), need to be considered independently.

The result in Seventh Heaven is that you can very naturally sculpt the frequency content of the reverb just as you could on the hardware. Just try not to think about what’s going on under the hood of a sampled reverb to make that possible… but rest assured there’s a good reason it’s only available in the professional version!

Some of the M7’s best presets have delays built into them. The M7’s delay is essentially a multi-voiced, modulated, late reverb echo that creates a wonderful sense of space; perhaps as rhythmic beat in a room or a distinctive slap echo off the back-wall in a hall.

The reverbs selected for the standard version of Seventh Heaven happen to not have any delays by default, but you can add one into the reverb at a fixed -6dB level for creative purposes. This can even be synchronised to tempo much like you can with the pre-delay. As the delay only affects the late reverb (not the reflections) it is best to add any required echoes in this way so that the independent reverb engines can do what post effects are not able to do after the early/late/VLF reverbs are combined.

The really big guns are coming out for Seventh Heaven Professional though. What happens when you’ve discovered Vocal Plate B is just the perfect match for that vocal lead… it’s got a strong reflection that sounds divine but the 276ms delay isn’t quite in time with your track? Well, it’s a sampled modulated reverb tail – you can’t change that, right? You can in Seventh Heaven Professional! You can unlink the delay from the original sample, sync it to tempo and even change the level of the reflection. Workflow like this has never been possible before in sampled reverb, and it’s just another example of the attention to detail that went into the sampling and design of Seventh Heaven Professional meaning that you’ll just forget that this is a sampled reverb at all.

Q) How should I use the early reflection selector in Seventh Heaven Professional?

There are 32 different reflection patterns, but how do they differ?

As often is the case with reflections, the differences are very easily heard on impulsive sources like a drum loop. As you work through the reflections you will notice they are arranged into groups. For instance as you move through pattern 0-9, the reflections sound much like that of a close mic set-up in a small environment that is becoming gradually more reflective as you work towards the top end of the group.

Contrast this with the clearly audible grouping in patterns 26-31; here we have a much more distant set of reflections again in an environment that is becoming gradually more reflective as you work up to the final pattern.

It is no coincidence that many of the smaller room presets use the lower pattern numbers and the halls/spaces tend to use the higher pattern numbers. With a little experimentation it quickly becomes clear how best to use the reflection patterns to great effect.

When you’re pressed for time, you need a reverb that can deliver results fast.

There’s no other reverb that can provide such quality and sonic breadth of Seventh Heaven’s 30 position preset dial for so little effort. It’s why time-pressed professionals in the world’s best studios from London to LA are pulling up Seventh Heaven time and again despite having both in their plug-in rack. So, we offer a little sweetener discount with the Seventh Heaven with Professional Bundle just in case that sounds like something you might experience as well.

Q) Why do the presets in Seventh Heaven have a 1 or 2 after their name?

The original M7 came with a selection of presets that used the initial version 1 algorithms. These are what the M7 was best known for, but some people were asking for a brighter and more modulated reverb that evoked memories of some of the classic presets in reverbs of old. Firmware version 2 was born.

There are rooms, halls, and so on originating from both the v1 and v2 algorithms, and depending on the base algorithm you’ll find those in a distinct bank category in an M7. Halls 1 all use the v1 algorithm, Halls 2 all use v2 algorithm. This nomenclature has been reproduced in Seventh Heaven Professional so you’ll know at a glance the algorithm you are dealing with.

To a first approximation, with a version 2 preset you will find the filters to be brighter and the modulation to be more dramatic than in a version 1 preset (the differences are of course more extensive than this high-level summary seeks to set out).