By LiquidSonics17th May 2022No Comments 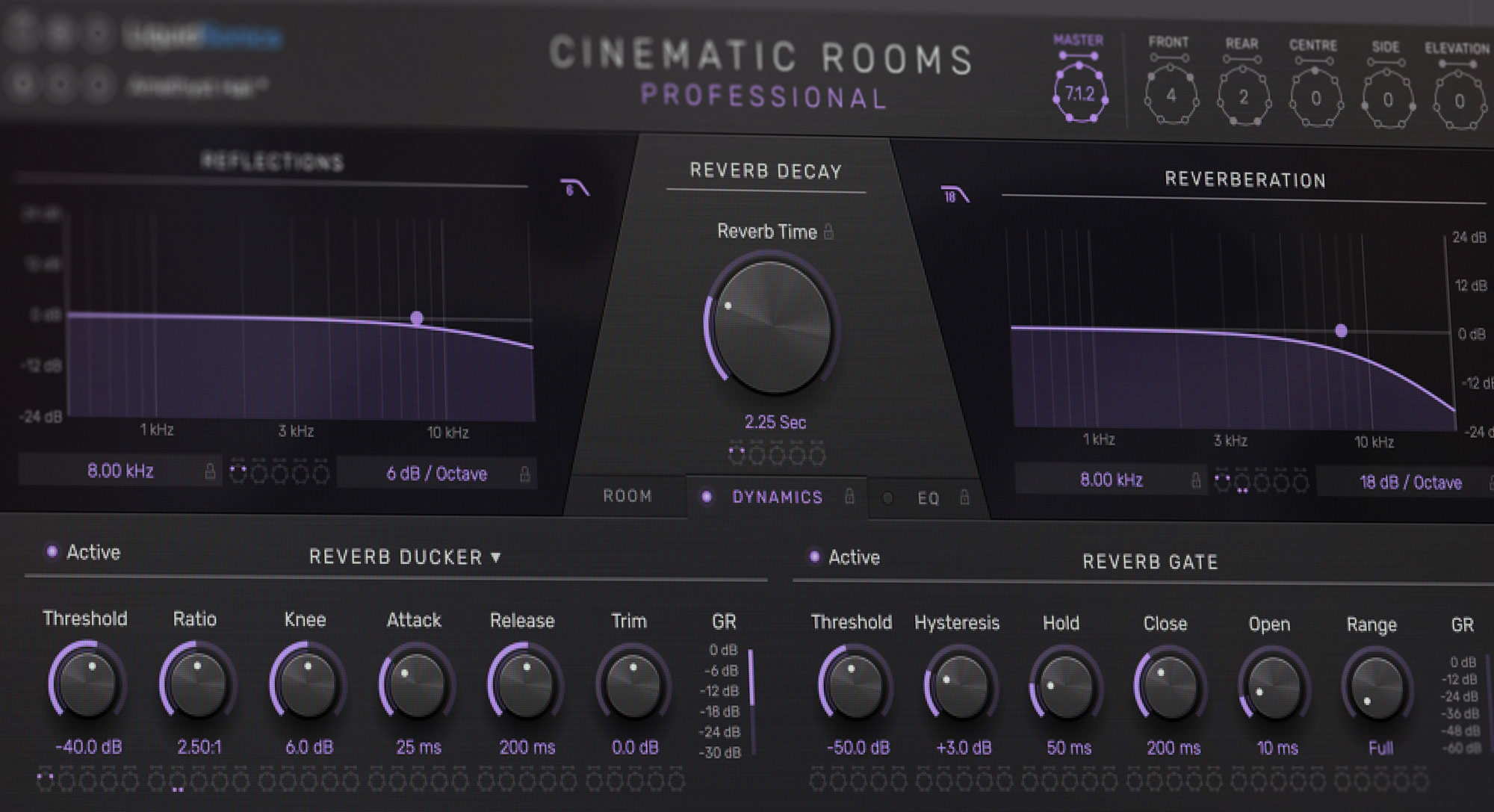 As part of our ongoing commitment to support LiquidSonics users we continue to add valuable, and often user requested, features to our reverb plugins at no additional cost. The response to the introduction of dynamics processors in Seventh Heaven Professional and Illusion has been superb. We’ve had a lot of requests to bring the feature to Cinematic Rooms Professional from owners eager to get in on the action!

The free Cinematic Rooms Professional v1.2 update takes the gate introduced with these great plug-ins and adds them to our flagship surround reverb – with a little extra, a gate. Of course all support the surround editing planes if you need to make adjustments across the stereo field. You can now set up gated reverbs at the same time as using a compression or ducking effect as well for an extra degree of creative control.

The compression and ducking module can be set up using one of the following modes:

The right side is dedicated to gating, which is applied exclusively to the late reverb tail.

These modes are similar but are useful for completely different reasons. Compression can be added to thicken a reverb making it sound even more dense in the initial phase as it will squash down any peaks and accentuate the speed of onset, whilst ducking is usually employed to reduce the weight of a reverb whilst a passage or phrase is playing so that the reverb only moves in to fill space left in the mix.

In these configurations the output signal is reduced when it rises above the threshold value at a rate determined by the ratio. The knee controls how gradually that ratio is applied. Attack and release control how quickly the compression begins to act on the signal when it is above or below the threshold. A simple trim control is provided to allow level adjustments because a compressor can significantly affect gain.

Ducking a reverb is a powerful tool if you need to prevent a reverb overwhelming the dry signal but still want the tail to be clearly audible. It helps you to keep the reverb tucked away until there is space in the mix for it to fill the space between phrases – this often this will improve clarity and intelligibility. Adjusting the attack, release and ratio is key to finding a setting that sounds natural.

By ducking only the reverb (not the reflections) one retains the spatialisation effect of the early room without compromising intelligibility from excessive reverb tail fighting with the dry. Usually reflections will greatly enhance the dry without muddying it, so it is best to keep them in many cases. This simple but innovative concept was first introduced with Illusion and has been very popular in the recent Seventh Heaven Professional update, so it was natural to bring it over to Cinematic Rooms Professional as well.

When the reverberated signal falls below the gate’s threshold it is reduced in gain by the number of decibels specified by the range control. This reduction happens after the pause time determined by ‘hold’, and takes the time to reach the level reduction determined by the ‘close’ time.

In the example above, when the signal falls below -50 dB, the gate waits 50 ms before responding, and then reduces the signal by the value set in the range control over a period of 200 ms. When the signal exceeds the threshold plus the hysteresis amount (i.e. -50dB + 3dB = -47 dB in this example) the gate will re-open over the time period set by the ‘open’ parameter (10 ms in this example). Hysteresis and hold are helpful to prevent a gate ‘chattering’ (i.e. opening and closing rapidly as a signal fluctuates around the threshold).

The close and range controls allow you can gently but assertively remove the reverb in a very smooth and natural manner.

Gated reverbs are especially useful with drums or when you need to keep the reins on a reverb tail to avoid overwhelming a mix or for creative 80’s style effects.

To get the update just install the full plug-in over the top of your existing installation. Although the standard edition does not include the dynamics processors it has been updated to v1.2.0 as well which includes some minor maintenance fixes and Apple Silicon support.

Important: Please ensure you have iLok License Manager v5.4 and up.

Just in case you missed the news, we have recently enabled an interest-free instalments payment option in the LiquidSonics store. Now you can split your payments by anywhere from two to six months which means you could pick up a copy of Cinematic Rooms Professional and pay over six $66.50 monthly instalments. Find out more here.