How Does Your Reverb Roll?

By Matt Hill24th March 2021No Comments 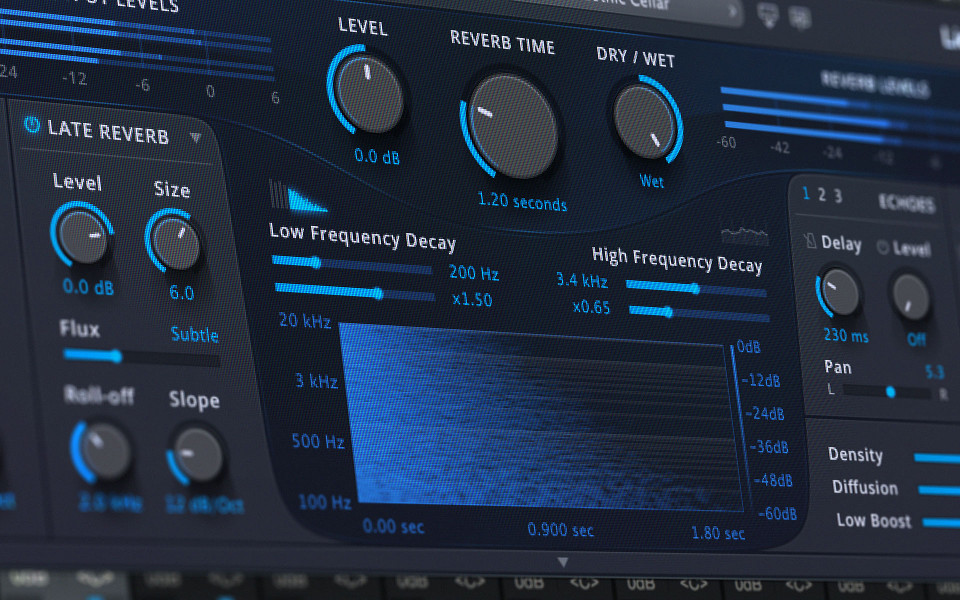 I’d like to take a moment to talk about a very important topic in reverb design – reverb time multipliers, the some of the differences in their implementations, and what I think everybody should know about them.

I’ve always had a soft spot for TC reverbs, my first native reverb was one of theirs. This week’s release of native plug-ins of TC Electronic’s VSS4 from the System 6000 feels like an important one, and it got me thinking about some of the differences between two of my favourite classic hardware classic reverbs. I’ve enjoyed the discussion of them in the forums and in private discussions with some fellow reverb nuts.

The TC Reverb 4000 (and System 6000) and the Lexicon 480L are both fantastic units, but sound very different and the behaviour of some key parameters differs significantly. In this post I am going to focus on how they present reverb time multipliers to the producer in very different ways. These are often not well very well understood topics in reverb, and often people don’t know why one device behaves so differently than another at similar settings, so I thought it might be helpful to shed a little light on how they work.

We will also look at why sometimes sample rate really does matter when it comes to the sound of a reverb!

Time & Frequency Matter In A Reverb

As sound passes through air and reflects off surfaces, generally more high frequency content is absorbed than low, so the high end reverberates for less time than the bass. That’s true in most reverbs, although some spaces differ and a tiled room for example will sizzle for much longer in the highs than the lows.

In a digital reverb simulation we can set up a reverb decay time, say 5 seconds, and apply multipliers to the high and low reverb above/below one or more crossover points to affect the decay relative to these points. This allows us to recreate the effect of high frequencies reverberating for a different amount of time than the low frequencies.

The key difference here with a standard equaliser is that they are varying in time, whereas a normal equaliser would apply the same frequency profile the whole time. The way they vary over time however will depend on their implementation, and that is what I would like to explain to you.

The classic Lexicon school of design is probably the most commonly encountered in the reverbs you use most often. This was to implement multiple simple low and high pass roll-off filters within the loop. As audio rattles around the loop it continually hits these filters – the effect is an iterative rolling off of the low and high frequency content as we go around the loop. It is probably the most natural sounding way to do it, reflecting how things work in the real world.

This is also how Cinematic Rooms and countless other reverbs work so you should be very familiar with the effect. Within the reverb algorithm I simply place multiple filters all tuned to the right cut-off to get the reverb time we want above / below a given frequency, and as the audio passes around the loop it keeps hitting them. So the roll-off is iterative, and sounds very natural.

The key thing to know is that the reverb should hit an RT60 at the selected frequency at the time specified by the multiplier, but it won’t stop there. So in a 5 second reverb if you set a multiplier of 0.5x at 6 kHz, you should see the reverb hit the -60dB point at 6kHz in half the time that it would have if there was no high decay multiplier (i.e. at 2.5 seconds). After that time the reverb is going to continue to roll off below this point, so small multipliers can create very dark reverb tails quite quickly.

Another approach is to implement multiple crossovers within the loop, VSS4 for instance has 3 crossovers presenting 4 different reverb regions (low, low mid, high mid, high). This allows the reverb decay time to differ in each of the regions covered by the crossover network. Anybody who has used a multi-band effects processor will immediately be familiar with these types of crossover controls and the way we can sculpt effects differently in different bands.

The result is that high frequency content does not progressively roll away as we observe with an iterative in-loop filtering system. The reverb time is locked in designated regions and decays at different speeds within them. The sound of this is quite distinctive when compared to an iterative roll-off at the high end where in effect the cut-off point starts high and sweeps down over time.

Illusion operates in this way, and is why you will find the sound of Cinematic Rooms‘ contouring very different to the sound of Illusion’s reverb time multipliers (and this is also why I very deliberately used a different term). No one way is better or worse, but an understanding of each will help you to sculpt a sound the way you like it and help you pick the right tool for the job.

As in this style of reverb multiplier you don’t get the continual filtering down as with the roll-off method, a reverb will tend to be sound brighter for longer into the tail. Often you will also be presented with reverb time multipliers at high frequencies greater than 1x, but that is usually not the case with a roll-off style. That means those tiled rooms will probably fizz with a little more vim and vigour.

But Watch Out For The Modulation!

Anybody familiar with some of the TC reverbs may note that they do experience some roll-off filtering over time in some reverb patches as well despite the use of crossover style decay time multipliers. Certainly in my Reverb 4000 I can easily hear the iterative roll-off behaviour in some of the VSS4 presets. Typically this is due to the chosen modulators – turn them off and the effect goes away.

Often in older designs the delay modulators are implemented with linear interpolation. That means when we want the value at a point between two delay samples, we get it by taking the value as a proportion of one and a proportion of the other. It’s quick and simple, ideal if you don’t have many processor cycles going spare. The trouble with this is that linear delay line interpolation has a low-pass filtering effect, so the more modulation the more low pass filtering you will hear. That creates an iterative roll-off as the audio hits modulators over and over again round the reverb loop – much like the roll-off filters, but with less control over the frequency as it’s related to modulation depth. This sounds good, we usually quite like that sound, but the linear interpolation filtering frequency is also related to the Nyquist frequency. This means the roll-off rate will actually depend on the sample rate that the reverb is running at. Linear interpolators will introduce less roll-off at high sample rates than low sample rates. By the time you’re running a reverb up at 96 kHz the problem is largely gone, and at 192 kHz not many people are going to notice it at all – but who regularly runs their sessions at 192 kHz?

The TC Reverb 4000 gets around this by under-sampling higher sample rates so the effective processing rate (and hence the roll-off rate) is the same so at least the filtering effect is decoupled from device sample rate – but some software emulations run at the native DAW rate so the modulators can sound different at different sample rates in a way that wouldn’t have necessarily been the case in hardware. That has caught me out when comparing software emulations to hardware originals on occasion.

There is a lot of discussion about whether plug-ins sound different when run at a different sample rate. So as you see, with a reverb sometimes it can make a big difference depending on the design of the modulators. There are more sophisticated modulator designs in use today, meaning it is generally only a problem seen with some emulations. So before you instinctively bounce down at a higher sample rate, take a moment to check your reverbs actually do sound the same to avoid some surprises at the your top end of your mix!