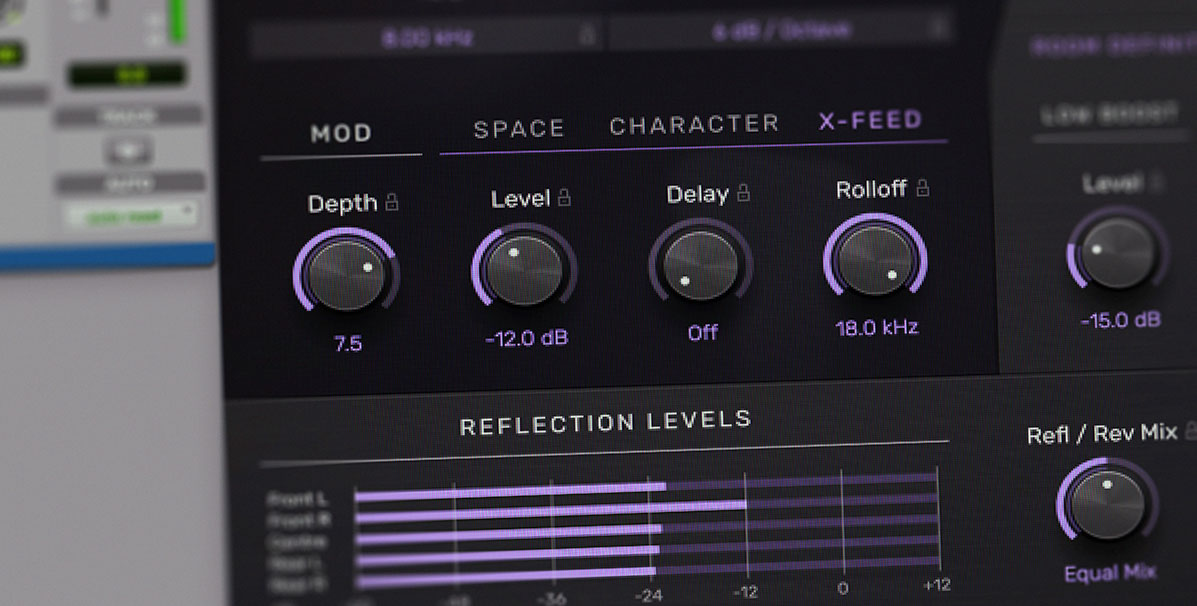 We have talked about Cinematic Rooms Professionals control over crossfeed in previous blog posts, but what exactly is it and why is it so important?

In post production as sounds pan around a space it is important that the reverb responds as the ear would expect, providing us with additional cues to localise the sound. In addition to the information the brain processes from the dry sound, it takes into consideration the delays from initial reflections and the body of the late reverb – but most reverbs do not provide any control over these factors so it can be difficult to sculpt a space that behaves as desired. From the moment Marti Humphrey (The Dub Stage) emphasised the importance of pan tracking but said how he often found it to be an area of weakness in many other surround capable reverbs I knew it was something I wanted to tackle head-on in Cinematic Rooms Professional.

In the screenshot below, we show an example where the reflections and reverb have maximal crossfeed. This is typical in most late reverberation algorithms. It doesn’t matter where the input pan is, the level of reverberation is equal in all channels. This means a reverb will exhibit very poor pan tracking.

Suppose we took the panner from the bottom right (the surround right channel) and moved it to the bottom left (the surround left channel). The output level across all the output reverb channels would remain unchanged so the ear has no real way to localise the source of reverberation in the space; be that time of arrival, level, or other factors. Of course the ear will hear differences in the sound as we would desire, but there will be very little localisation information portrayed to help us place it.

In the next image, we have moved the pan position to the surround left channel, and reduce the reverb crossfeed by 12 dB. Notice how the reverberation levels are reduced by around 12 dB for all channels other than the surround left.

The output level (see the Pro Tools mixer) is showing a small reduction in these channels as well, but overall the level is still quite similar because the reflections are still at maximum crossfeed.

Finally we have moved the panner to the front right, and also reduced the level of reflection crossfeed. Note how the Pro Tools levels in the surround bus are dramatically lower for all channels other than the front right. As the panner is moved around, this will track the position naturally so it is much easier to localise the sound.

Of course in Cinematic Rooms Professional you can also change the crossfeed delay and filtering characteristics so time of arrival and acoustic considerations are taken good care of. The larger the delay between channels the greater larger the room will sound, so you can create very large spaces with high crossfeed delay or very tight spaces by reducing it to the minimum. By using the filters we can further enhance these psychoacoustic effects as large spaces will tend to roll off high frequencies in greater quantities as sound travels through the air.

Most true-stereo reverbs have around 10ms of crossfeed delay but it cannot be controlled in any way, usually due to inherent limitations of the algorithms. Having control of these features gives you a great deal of latitude to define a space even when working in stereo.